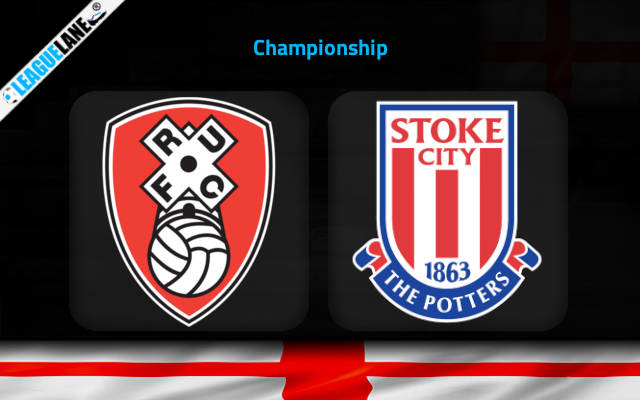 Stoke look to have entered the post-World Cup period with a highly-improved mindset. They are currently playing attractive football resulting in numerous chances and high-scoring affairs.

The Potters have bagged at least two goals in each of three games they have played this month, two of which came in the league.

They saw off Premier League side Nottingham Forest 2-1 in a friendly before claiming four points from the league fixtures against Cardiff City and Bristol City.

Liam Delap and Jacob Brown were on target in a 1-2 victory last weekend at Ashton Gate. It was only Stoke’s eighth win of the season.

They are now 17th in the league standings, sitting three points above Monday’s counterparts Rotherham.

The Boxing Day clash against the Millers provides Stoke with an excellent opportunity to continue their high-scoring form.

Rotherham will go into this tie in a completely different mood, following back-to-back losses to Bristol City and West Brom.

The Millers conceded three goals in each of these two games. This will be the music to the ears of Man City’s loanee Liam Delap who found the back of the net in each of his previous two appearances.

Rotherham did not play defense at all in the last two games. They allowed three goals in each of the successive defeats to Bristol City and WBA. The Millers looked dreadful last weekend at The Hawthorns, allowing nine shots on target and delivering just two attempts in total at the opposite end.

We’ll go with Stoke to win & Over 2.5 goals FT bet at the 4.00 odds, while we also like the 3.10 odds offered for Liam Delap to score anytime for the visitors.