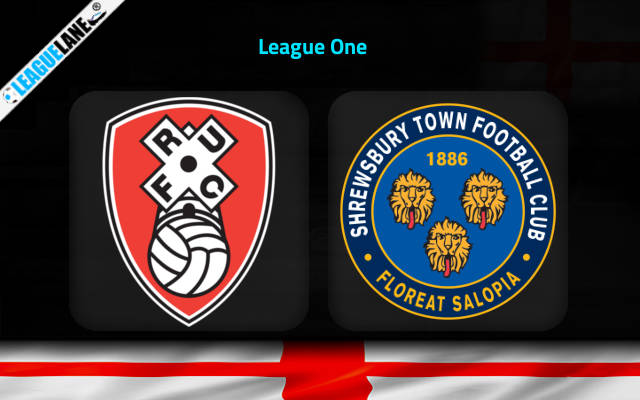 Game week 39 of League One brings us the match between Rotherham and Shrewsbury Town on Saturday at Rotherham.

Rotherham is the top contender of League One in this season. They are 4-points ahead of the second team on the league table. They have only lost in a few of their matches this season as well. From the last ten matches, Rotherham has 6 wins, 3 draws and 1 loss. From their matches so far, the team has got 80 points to their name.

Rotherham played their last match against Lincoln City. Rotherham scored two of their goals within the twenty minutes of the match and Lincoln could score only one, ending the match with 2-1 FT score.

Shrewsbury has played poorly in their matches recently. Most of the last ten matches, over half the matches, have ended in draws. Their performance has placed the team in the bottom half of the table in the 17th position, with 42 points to their name.

Shrewsbury Town played their last match against Morecambe, in which Morecambe failed to get past the defences of Shrewsbury Town while the host scored five goals. The match ended in a win for Shrewsbury with 5-0 FT score.

Rotherham has satisfied their fans with top class performances in their home ground. Before their last loss in home match against MK Dons, the team was unbeaten in thirteen matches. Shrewsbury, on the other hand, has not played well in their away matches. They have only two wins to show from all their road trips in this season.

I believe Rotherham has the advantage of playing in their home ground, making them the most probable team to secure the win. Rotherham’s opponents have scored against them in the recent matches. SO, we can expect both teams to score in the match.