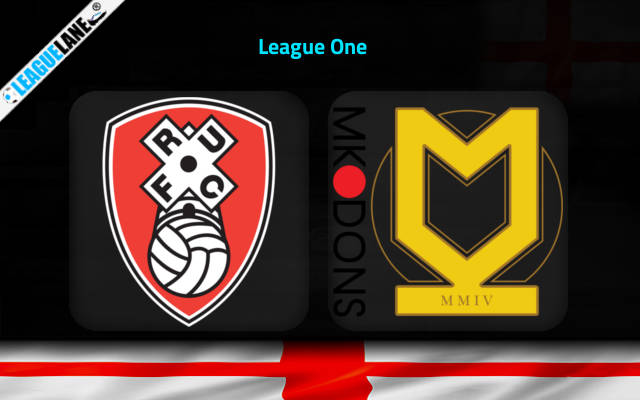 Rotherham being relegated to the third tier of English at the start of this season with a dominant season are looking certain to get promoted straight back up to the Championship and are currently favourites to go up as champions of League One.

However, in their most recent game, they were unable to get the defense of bottom half of the table club, Shrewsbury in a goalless game. This marked their second draw in five league games.

Having dropped just four points in their last four league games, the club is currently top of the division, seven points clear of their closest opponents who have two games in hand over them.

Having finished in mid table last season in League One, MK Dons have been impressive in their own right but should step up significantly in order to seal an automatic promotion spot.

They were last seen in a comfortable 2-0 win at home against in-form team Bolton Wanderers. The result was their 3rd consecutive win and took their winless streak up to eight fixtures.

Having dropped just four points in those games, the club is now 3rd in the division, three points behind the 2nd place team.

The previous four League One fixtures at this venue witnessed less than three goals. Additionally, a similar score line was witnessed in four of the visitors’ last five league matches. Hence, expect a low scoring game.

Michael Smith has made twenty seven goal contributions this season for his club across all competitions. The 6 feet 3 inch striker has scored more than ten goals in a league campaign for the first time this season at the age of thirty. I have backed the Englishman, who is the division’s second highest goal scorer to score anytime.