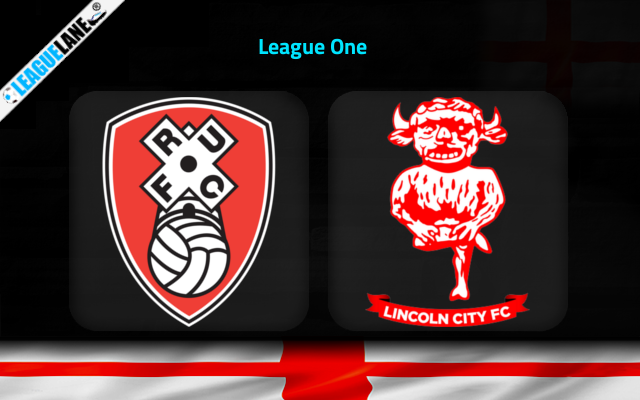 Rotherham are enjoying an excellent League One season so far. They have managed to record a positive display in frequent intervals of time. As a result, they are secured at the top spot of the table with a total of 76 points, four points clear from the second spot.

However, their for has been bit worrying of late. They lost to 3rd spot MK Dons in their most recent league fixture and adds up with a disappointing goalless draw against 17th spot Shrewsbury to construct a thread of two winless games. They will be hoping to return back to the winning ways by sealing a win from the coming league fixture.

Meanwhile, Lincoln City are having a disappointing form since the beginning of this league. They sits 18th on the table with a total of 38 points. They are 6 points away from the danger one. Their attacking and defensive lineup are enjoying an average form so far.

Rotherham stays unbeaten in 15 of their total 18 league fixtures at home. They owns an impressive attacking and defensive lineup here.

On the other side, Lincoln City are on the back of three subsequent league defeats on road. Also, they have leaked two or more goals in each of those three on road fixtures.

On top of that, Rotherham possess an impressive head to head stats against Lincoln City. Therefore, we are expecting Rotherham to record another three pointer at Aesseal New York Stadium on Tuesday when they meet Lincoln City in the 25th Round of League One fixtures.