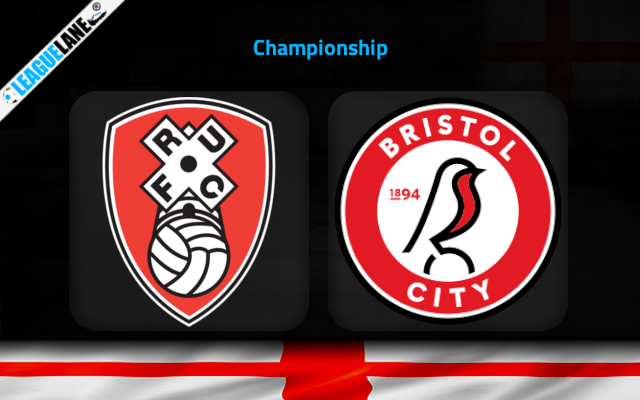 Rotherham vs Bristol City Predictions and Free Tips from our expert tipsters when the teams go head-to-head in the England Championship on Saturday, 10 December 2022.

Rotherham are on an average stretch of performances this season. From the last 6 league matches, the team has got one win, two draws and three defeats.

Meanwhile, Bristol City have returned back to the slow start they had in the beginning of the season. They are currently on a six-fixture winless streak in the league.

The past two overall wins were evenly split, with two each for either sides. Fewer than 2.5 goals were scored in the previous five encounters between these two.

Who will win the match between Rotherham vs Bristol City?

Neither of these two teams are having a decent form in the league lately. Both the sides are winless in the last two outings at their respective patches.

Selecting a clear winner will be a tough ask since both these sides are having a similar form. However, Rotherham are a little more likely than Bristol, who are winless in the last six league games.

This fixture is unlikely to have more than 2.5 goals ft. The last two affairs including Rotherham were low-scoring matches. The case of Bristol City is not different too.

On top of that, the past five head to head meetings between these two teams had fewer than 2.5 goals full-time.

Neither of these two owns a decent defensive steel this season. They both are having negative goal difference and have been allowing goals from the opposite side consistently. Therefore, expect a both teams scoring affair on Saturday.

With Bristol City having a poor run of form and Rotherham having the potential to beat them, it’s not wrong to expect a pleasant display from the home side on Saturday. But the possibility of a draw cannot be ruled out since Rotherham have been recording stalemates of late.