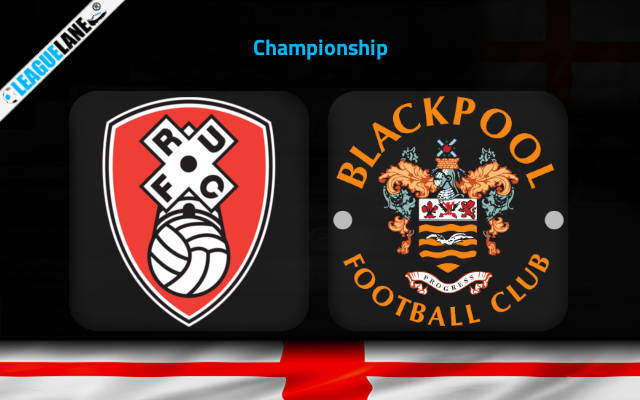 Mid-table side Rotherham will be looking to get their season back on track after an inconsistent run that’s seen a mixture of results. They will host Blackpool at Aesseal New York Stadium this Wednesday.

The host suffered a 3-0 defeat against a determined Sunderland side on matchday 6. However, they should be in good spirits after earning a hard-fought 1-1 draw against recently relegated side Watford.

Just one point ahead of Rotherham lies Blackpool, who have endured their own mixed bag of league results so far this season. The visitors ended their three-game winless streak.

They’re coming off a 1-0 away win over Huddersfield in the last round. Theo Corbeanu found the back of the net in the 38th minute of the game.

That important goal helped Michael Appleton and his men extend their unbeaten away run to three games. Also, a win in this fixture will take them to the top four in the league.

The recent form is showing that Michael Appleton’s team have only lost once in their last five games. On the other hand, Millers are winless in four of their last five matches. Hence we can expect the visitors to dominate this game.

Paul Warne’ main defender Richard Wood has scored four goals and kept two clean sheets in his last three Championship matches at the Aesseal New York Stadium, while Theo Corbeanu for the visitors has scored four of his last five league goals away from home.

It is also important to mention that Seasiders have scored a total of seven goals in their last four league matches.

Our prediction is that Both Teams to Score- the odd for this tip will be at 1.80. In the head-to-head encounters, both teams have scored in three of the last four meetings.

Moreover, our next tip for this game is that Rotherham will win by 2-1 – the odd for this tip will be at 9.50. The last two consecutive games between both clubs ended in a 2-1 scoreline for Rotherham.