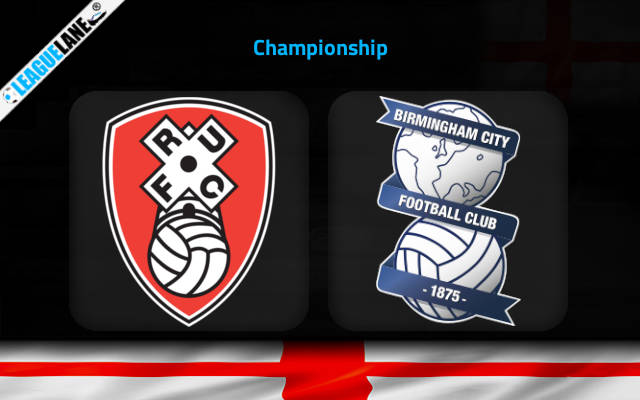 Rotherham and Birmingham will face an exciting Saturday program in Championship with their clash at Aesseal New York Stadium.

They are on a good stretch of performances lately. From the last 8 overall matches, the team has got three win and four draws. The host currently stands 13th on the table. Rotherham are yet to record a defeat upon returning to the Championship.

The team conceded only two goals in the previous four Championship outings. They will have a great chance to keep their strong spell of form going on Saturday.

After recording a couple of unbeaten outcomes in the opening two fixtures, Birmingham mad it three consecutive games without a win in the campaign.

Two defeats and a draw affected their position in the league standings. They stands 18th on the table currently.

The problem for the Blues lies in their defensive line which allowed goals in four of the five games the season.

The Millers were unbeaten in 14 of the past 15 overall fixtures. Rotherham demonstrated their strength in the opening four league matches despite of the bookies expectation of them to face the relegation once again.

Moreover, they were also unbeaten in four of their past 5 appearances in front of the home crowd.

On the other hand, Birmingham were winless in 10 of the past past 12 overall fixtures. Most importantly, they are on a 5-fixture losing streak on the road.

This match is a great chance for the hosts to maintain their unbeaten form at the beginning of the season. We can see the value of backing Rotherham to win at the 2.00 odds.