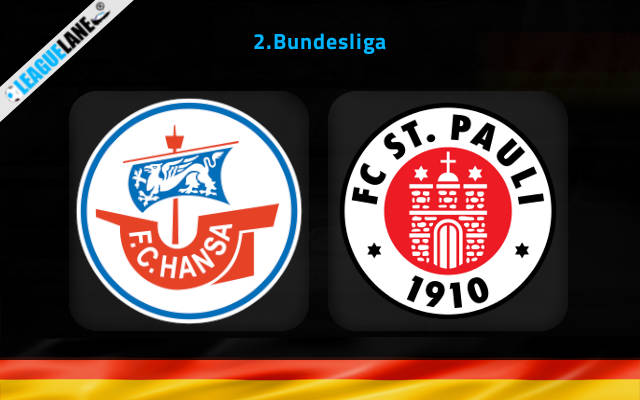 In game week 28 of 2. Bundesliga, Hansa Rostock played their last match against St. Pauli on Saturday at Rostock.

Hansa Rostock had achieved mixed results in their matches this season. However, in their recent matches, the team has shown improvement, earning wins in three of the consecutive matches. Rostock stands 11th on the league table with 34 points from their matches.

Rostock played their last match against Sandhausen, in which Rostock scored their goal in the beginning of the second half. They defended their side well, leaving the opposition goalless. The match ended with 0-1 FT score.

St. Pauli is back on track with their winning attitude. The team had a hiccup with their form in a couple of matches, leading to cold streak. However, their team is back in-form and is currently unbeaten in their matches. The team now stands first on the league table and has earned 51 points from their matches.

Rostock’s recent matches show the team to be in a better form. They have won consecutively in their last three matches and will hope to keep this streak going. St. Pauli has played well in their matches this season. They sit at the top of the table because of their strong form. The team currently has a four-game unbeaten streak.

I believe St. Pauli will most likely secure the win in the match. St. Pauli has scored most of their goals in the recent matches in the first half of the match and can be expected to do so in this match as well.