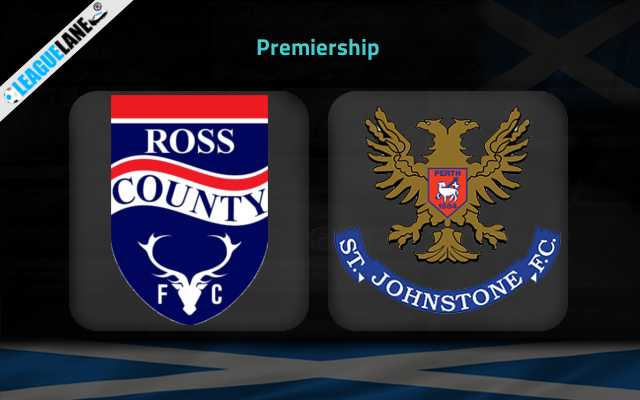 Ross County vs St. Johnstone Predictions and Free Tips from our expert tipsters when the teams go head-to-head in the Scotland Premiership on Saturday, 17 December 2022.

Ross County will be hoping to bounce back from their previous Premiership fixture’s defeat against Celtic. They were having a two-fixture winning streak before conceding that defeat.

Meanwhile, St. Johnstone are on a five-fixture unbeaten streak in the league. However, it is worth noting that the previous two fixtures had finished in a draw.

Ross County is having a four-game unbeaten streak against St. Johnstone. Two of the last four meetings between these two had finished in a draw.

At this venue, St. Johnstone is having a six-fixture winless streak against Ross County. It is worth noting that five of those six fixtures were stalemates.

Who will win the match between Ross County vs St. Johnstone?

Three of the last four games played by these two sides at the respective patches had finished as winless for them. Their head to head tradition suggests a stalemate scenario as they have been recording it often here.

Therefore, we are not quite sure about picking up a winner from these two considering the above stats.

Three of the last five games played by these two teams had goals over 2.5 ft. Also, both the sides have a 2.5 goals per game rate.

Moreover, a set of drawn fixtures in their h2h matches had also seen goals at a good rate. In that case, expect this fixture to have goals over 2.5 ft.

Ross County are in possession with a weak defensive line this season. They have leaked goals in their previous six home fixtures. On the other side, St. Johnstone drew the past two matches due to their defensive errors.

By the looks of things, goals are likely to come from both ends of Global Energy Stadium on Saturday.

We are inclined to think that Ross County and St. Johnstone may well find themselves both scoring in what promises to be a very even battle here.

Instead of selecting a winner, which is surely a tough call, we like to place the both teams to score at 1.95 odds as the main bet. For the second tip, we like to back the over 2.5 goals bet at 1.65 odds.