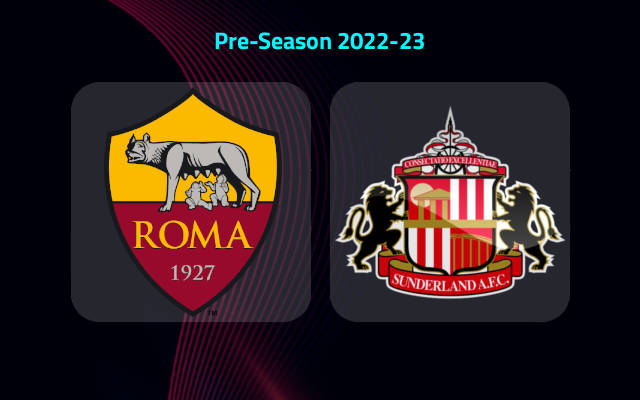 Jose Mourinho’s Roma are the reigning and inaugural Europe Conference League champions and by virtue of that triumph the Portuguese manager became the first coach to lead a team to victory in all 3 of the UEFA European competitions.

They have now made some impressive signings and the team will be determined to make the most of this upcoming season. Moreover, the ‘Special One’ is also trying his absolute best to climb back into the top tier of hierarchy of European managers.

And it seems that his team has kind of gotten a perfect opponent to build some confidence before the commencement of the official season.

They are pitted against Sunderland who play in the second tier of English top flight. In fact, Sunderland had played in the League One in the previous season and at the end of the campaign they had managed to secure promotion.

However, their form away from home has not at all been good, and this seems a huge handicap against the in-form Romans.

By the looks of things expect a victory for Roma this Wednesday.

The latest game of Roma was the Europa Conference League Final, which saw them lift the trophy at the end of the game. They were also unbeaten in 22 of their past 26 overall fixtures and all along they had found the back of the net in plenty.

On the other hand, Sunderland had managed to win a total of just 5 times away from home in the past 8 months and they had also failed to find the back of the net in 3 of their last 6 road trips.

Taking into account these observations, it is expected that Jose Mourinho’s Roma will secure a win this Wednesday.

Tips for Roma vs Sunderland