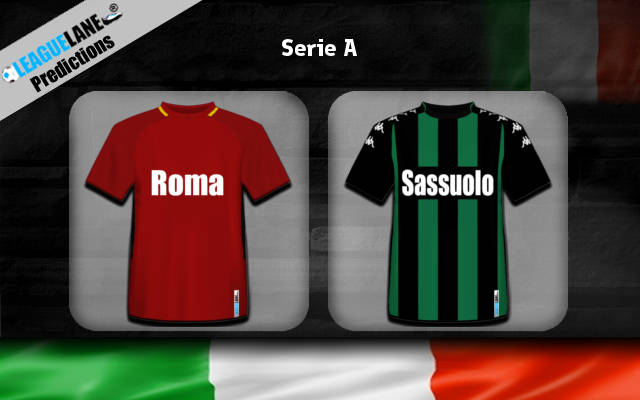 Roma have conceded three in an entertaining Round One draw vs Genoa at Olimpico and they have Lady Luck to thank for sneaking a point against Lazio in Derby Della Capitale. ‘Giallorossi’ still have some serious issues in defence and the addition of Chris Smalling won’t fix anything.

They can only hope Dzeko and co. can outscore opponent, and they have a decent one coming to town on Sunday – Sassuolo. The hosts will be without Under, Perotti and Zapacosta.

We backed ‘Neroverdi’ in DNB market against Sampdoria and praised Domenico Berardi – and they delivered big time. Sassuolo won 4-1 and Berardi scored three goals in the first half against his former boss, Eusebio Di Francesco.

Now they have a tricky game ahead, a trip down south to Capital, and Roberto De Zerbi won’t be able to count on Rogerio, Magnanelli and Tripaldelli.

Roma vs Sassuolo: Head to Head

Sassuolo are yet to defeat Roma – Giallorossi are topping the H2H duel with 7 wins and 5 draws.

Both teams have found the back of the net in all six games played at Olimpico.

Four of the six games at this venue had over 2.5 goals.

Roma won the latest meeting at home 3 to 1, and that is the most common result in their H2H – happened three times.

I wouldn’t trust Roma to keep a clean sheet against any Serie A club, let alone Sassuolo who managed to score at least one goal in every game played at Olimpico.

I do think Giallorossi will win their first game, though, with Edin Dzeko on the score sheet just to remind their front office how good he still is.

As for the third bet, let’s try 3-2 scoreline with massive odds.