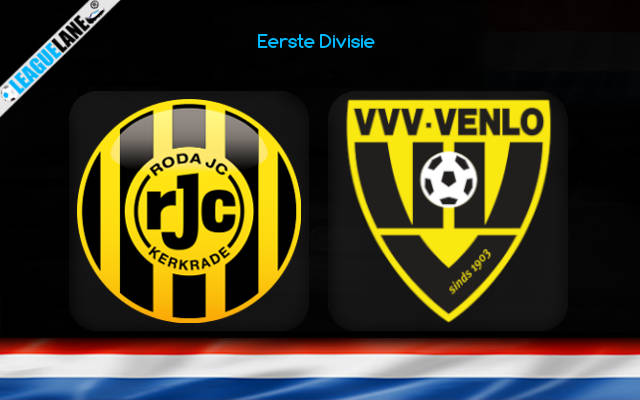 Roda have played some high-scoring affairs of late. Each of the last seven games they played saw three or more goals scored.

Jurgen Streppel’s defense allowed two goals in each of the last two league affairs. VVV have not been much better defensively of late either which is why we have reasons to expect an open game packed with goals on Friday.

Roda host VVV-Venlo on Saturday evening in the 17th round of the Eerste Divisie. The hosts will be hoping to bounce back from Monday’s 2-1 defeat at Jong Ajax.

They were unlucky to end the match against Jong Ajax empty-handed as they missed a penalty 12 minutes from time while the scoresheet showed 1-1. Then conceded a goal four minutes later to lose the game 2-1 at the end. Roda JC have thus taken just one point from the last two league outings.

Roda dropped out of the top-eight in the Eerste Divisie table as a consequence. The match with VVV should give the hosts a nice chance to return to winning ways.

VVV are one of the weakest teams on the road in the entire league. They lost six of seven league fixtures away from home this term.

Venlo have scored just four goals in seven away outings so far in the season. They generally boast the second-worst attacking record in the league with 17 goals in 16 matches.

VVV-Venlo will, however, travel to Parkstad Limburg Stadion in higher spirits following a 2-0 victory over top-half Eindhoven last Friday.

Tips for Roda vs VVV-Venlo