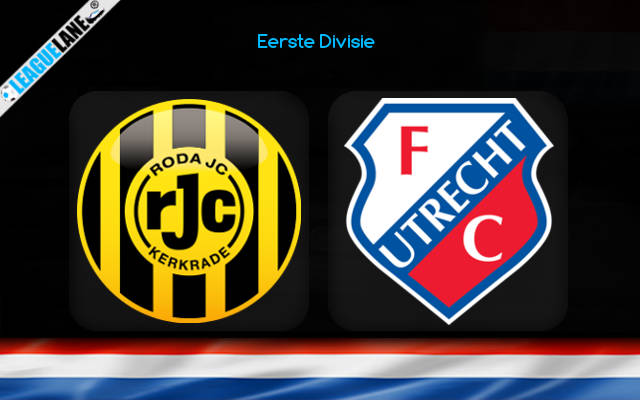 Game week 33 of Eerste Divisie brings us the match between Roda JC and Jong Utrecht on Friday at Roda.

Roda’s recent matches have produced some good results for the team. From the last ten matches, the team has got five wins, four draws and three losses. The team now stands 6th on the league table with 53 points.

Roda played their last match against Jong PSV. Both teams scored three goals each in the match, ending the match in a draw with 3-3 FT score.

Jong Utrecht has played poorly in their matches throughout the season. They have lost consecutively in their last five matches as well. The team stands second from the bottom of the league table with 28 points to their name.

Utrecht Reserves played their last match against AZ Reserves, in which AZ scored the only goal in the match, ending the match in a loss for Utrecht.

Utrecht’s poor performance in their matches put them at a disadvantage when they play against Roda. Roda has an unbeaten streak going on at the moment.

Roda has the advantage of playing in their home ground. They are unbeaten in the last seven matches and have won consecutively in the last two matches. Jong Utrecht has played poorly in their away matches. They have only two wins to show from the last ten away matches.

I believe the match will end in a win for Roda JC. Roda has contributed to the scoreboard in the first half itself and can be expected to score in this match as well. Utrecht not scored in most of their recent matches. So we can expect the match to end in a clean sheet for Roda JC.