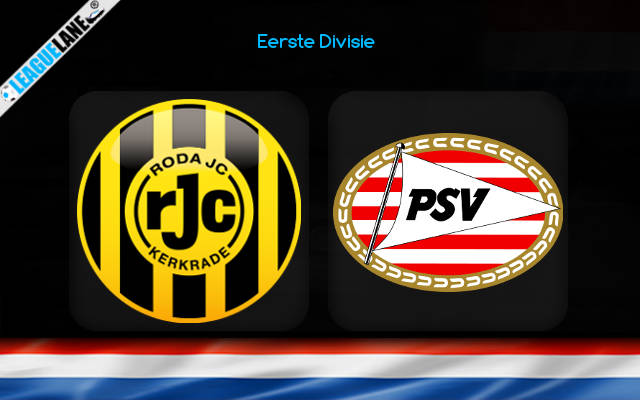 Jong PSV would travel south to Kerkrade close by the German border as they take on Roda JC. The hosts are favourites to take all 3 points as they look to climb up the table. Read our Preview, Predictions, and Betting Tips with Analysis here.

In 7 previous h2h contests each team has won a game, while the others have ended in draws.
The average goal per match is 3.29.
The last time these teams met earlier this year, the match ended with a 5-1 thrashing of PSV reserves.

PSV reserves after 3 straight defeats managed to pick up a win at home against VVV. In their last 5 contests, they have picked up 6 points through 2 wins losing the other 3 matches.

They are currently sitting in 15th position in the league with 10 points, 4 points ahead of bottom place Dordrecht.

The side from Eindhoven had been in terrible form away from home. They have managed only a point this season and have 3 straight losses in away matches.

Roda has picked up 8 points in their last 5 matches, with 2 wins and 2 draws coming during the period. With 4 wins and 2 draws this season, they sit in 10th position with 14 points to their tally.

A win at home this Friday could put Roda up in 5th position as they have a game in hand over most teams in the league. Their forwards have had no problems scoring however, they have conceded the second most goals for a team in the top half of the table.

Jong PSV has not been in the best of forms recently, and they are yet to win away from home this season. Them posing any challenge is unlikely.

Roda has been picking up necessary points recently and has been brilliant at home, they should dominate proceedings this Friday.

A Roda win with a comfortable margin is expected, we predict Roda to score more than 2.5 goals.

Tips for Roda vs Jong PSV