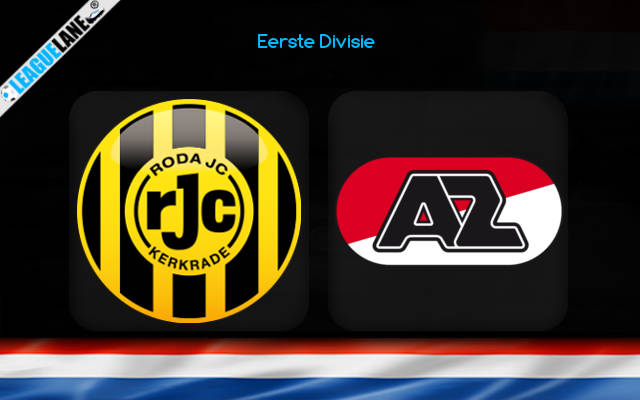 Roda JC and Jong AZ, the teams who are level on points and occupy the 9th and 10th positions in the Eredivisie respectively, will compete in 2 back-to-back league fixtures within a space of 72 hours.

The first of which is set to take place at the Parkstad Limburg Stadion in Kerkrade, this Friday. The match is set to kick-off at 19:00 UK. Read our Preview, Predictions, and Betting Tips with Analysis here.

The club should push for wins in both fixtures against the team, which would put them level on points with 3rd place, De Graafschap as they have a game or 2 in hand over sides above them in the league.

The AZ reserves team on the other hand started off the season with 3 consecutive wins but since then have struggled to gain any points, winning just a couple of games. They have further managed a point through a draw. They currently have 19 points from 14 games.

While the hosts have been doing well for themselves in home games with just a loss in their last 5, the visitors have had an embarrassing run of games on the road as they are on a 4 match losing streak in away games. Hence I have backed a dominating win for the hosts.

The visitors have failed to score in their last 3 away matches while the home team has kept the sheets clean in 3 of their last 5 games at home. It is unlikely AZ II will find the back of the net this Friday.