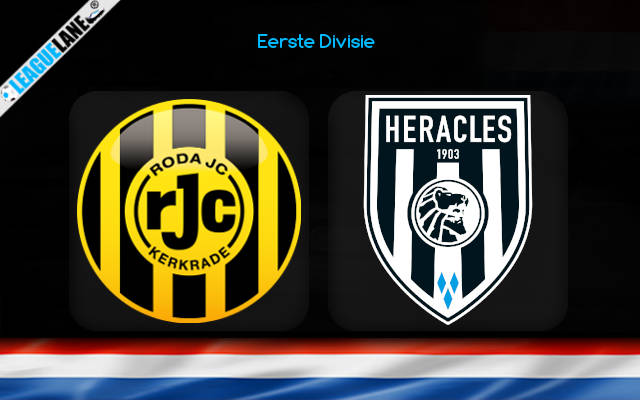 Roda vs Heracles Predictions and Free Tips from our expert tipsters when the teams go head-to-head in Eerste Divisie on Sunday, 11 December 2022.

League leaders Heracles will aim for another win as they are on a three-game winning streak. A win will help them cement their place at the top of the table, as their rivals are just two points behind.

Meanwhile, Roda have lost three of their last five outings. They have the worst form amongst the top ten teams on the table.

Both teams will be playing against each other after a period of four years. The last time the host won this fixture was back in 2016.

It is worth knowing that the visitors are unbeaten in their last three fixtures at this ground. Do also note that the host have not performed well against top teams this season.

Who will win the match between Roda and Heracles?

The past record clearly shows that Heracles have a better winning record against Roda. It is important to mention that the visitors have only lost three times this season. Not only that they have scored the most number of goals in the league.

We can expect Manager Jurgen Streppel to face a difficult game against the league leaders.

We can expect Heracles to score at least two goals. This is after considering that they have scored three goals when these two sides last met back in 2018.

This fixture rarely lacks goals. Both teams have scored in the last eleven head-to-head meetings. With just one exception. Therefore, we can expect the same trend to continue.

The league leaders will take advantage of the fact that Roda have lost two of their last three meetings. Therefore, the first tip is that Heracles will win this game by 2-1– at 9.50 odd. They won their most recent outing by 2-1 as well.

Furthermore, our second tip for this game is that Both teams to score – at 1.57. At Parkstad Limburg Stadion both teams have scored consistently in the last fifteen years.