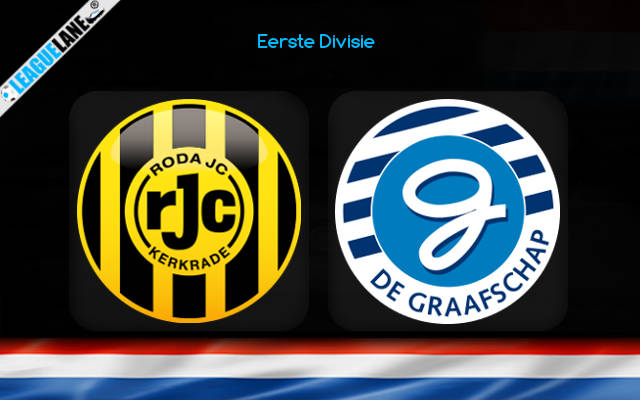 Graafschap sealed the last spot for Eredivisie promotion even though losing the previous league fixture. They are without a win since the last 4 league schedules and they are recently struggling in the league. Roda is currently on back to back league wins and they are also on the promotion side. Hoping to climb up the table, the Miners will host the visitors at Parkstad Limburg Stadion this Monday for the upcoming 27th Round of Eerste Divisie.

The Miners are at the 6th spot on the standing with 46 points from 29 games. They won 13 times in the league while drawing on 10 and losing on 6 other occasions. They scored 58 in total while conceding a sum of 35 which shows that they are leaky at the back.

Roda JC Kerkrade won back to back games against Dordrecht and Oss by scoring at least twice on each. They have been scored against on 5 of their previous 6 clashes, leaking 7 goals in the process.

On the other hand, Graafschap resides at the 8th position on the table with 49 points. Of the 29 matches played, they won on 13 games while drawing and losing on 8 games each. Their total goals to conceding ratio stands at 40:29 thus far in the league.

The visitors lost the previous game against Breda by 0-2 after their hat-trick run of draws in the league. Over the prior 6 league fixtures, they have conceded a total of 4 while bagging a sum of 5 for themselves.

We envisage a narrow win for the hosts as Roda JC Kerkrade have not been beaten in their last 7 league matches at home. Also, the visitors come into this schedule on the back of a defeat in their previous outing.