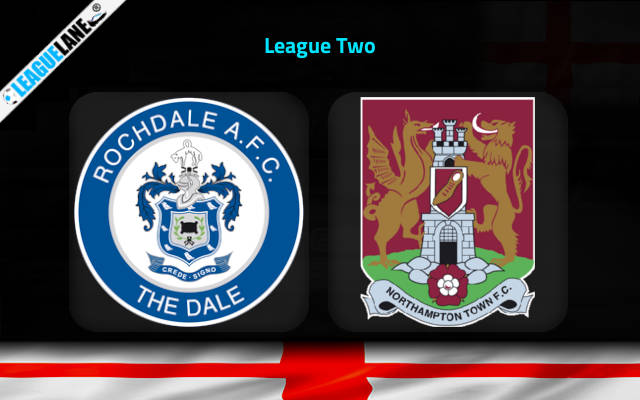 Game week 34 of League Two brings us the match between Rochdale and Northampton Town on Saturday at Rochdale.

Rochdale faced Port Vale in their last match. Rochdale crushed the hopes for a win for Port Vale by scoring a late minute goal by James Cameron Ball for. The match ended in a draw with 1-1 FT score.

Northampton Town faced Scunthorpe United in their last match, in which both teams failed to score in the match, ending the game in a goalless draw.

Rochdale’s form has been inconsistent throughout the season. The team will suddenly drop from an unbeaten drop in their form to a cold streak. However, this kind of form has given the team many draws in their name. Their performance has put the team in the 16th position on the league table with 35 points to their name.

Northampton has played their matches well throughout the season, earning an equal number of wins as their draws and losses combined. The team is unbeaten in their last five matches, scoring in three of the last five matches, in which they have found wins as well. Their strong performance has put the team in the 2nd position on the league table with 56 points.

Rochdale’s inconsistent form in their matches put them at a disadvantage when facing against a strong opponent as Northampton. Also, Rochdale has won in only one of their last five matches while Northampton has won in three. The visitors will look to add to their tally another win with this match.