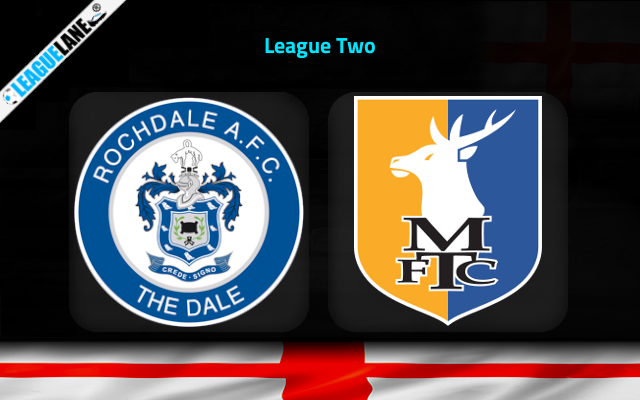 Rochdale are not pulling up any trees since the beginning of this season. They have an average offensive and defensive lineup. They have collected two points from the past three league fixtures to add up to a total of 40 points on the table for occupying the 19th position.

Rochdale recorded a 3-1 defeat against Leyton Orient on road in their most recent league fixture. With that defeat, they are now winless in each of their past five league fixtures. Anyways, they have been bettering themselves of late and will be entering the next fixture with enough of motivation.

Meanwhile, Mansfield are currently 5 points away from the safe zone. They sits 10th on the table with a total of 56 points. They have a decent offensive and defensive side. However, their form has been bit worrying of late.

Mansfield have played a 3-1 defeat against Port Vale on road in their most recent league fixture. With that defeat, they are now following a set of two subsequent league defeats. Both these defeats were against the teams in the promotion zone.

By the looks of things, either of these two outfits will go after the three points. Therefore, expecting a competitive encounter when both these outfits meet in a League Two fixture at Spotland Stadium on Tuesday.

Rochdale are unbeaten in each of their past 7 league fixtures at this venue. They have shared spoils in 5 of those 7 home fixtures. They have been also scoring goals at a good rate here of late.

On the other side, Mansfield are winless in five of the past 6 league fixtures on road. Considering that, we can’t expect them to be the winning side even if they occupies a better position.

On top of that, Rochdale are having an unbeaten streak against Mansfield at this venue. Therefore, we conclude this fixture with the prediction backing a highly competitive draw.