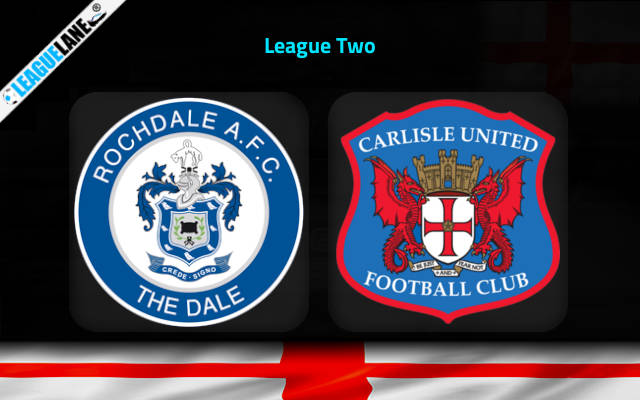 Rochdale welcomes Carlisle United to their home ground for their next match on Tuesday.

Rochdale has shown some rocky performances in their previous matches. They are winless in the last seven matches, in which five have ended in loss. Their poor form has placed the team in the 20th position on the league table, with 40 points from their matches.

Rochdale played their last match against Crawley Town, in which Crawley Town scored the only goal in the match within the first twenty minutes and maintained their lead until the end. The match ended with 1-0 FT score.

Carlisle United has played with inconsistency with their performance throughout the season. The team will be in form in for a couple of matches and their form drops suddenly, leading to poor streaks. However, their recent matches have ended with good results for the team. They are placed 18th on the league table with 46 points from their matches.

Carlisle United’s recent match was against Bristol Rovers. Carlisle’s goal in the second half gained the team the lead they wanted, ending the match in a win for the team.

Rochdale has played poorly in their matches this season. They have drawn in more matches than both wins and losses. They have also failed to score in five of their last seven matches. Carlisle has shown inconsistency with their performance this season. However, their recent matches have ended with good results.

Even Rochdale’s even matches have not produced the results the team had hoped for. Most of their home matches have ended in draw. The visitors have played well on their road trips recently. The team has not won consecutively in their last three matches.

Looking at the records, Rochdale’s tendency to draw their matches makes it possible for the match to end in a draw or in a win for Carlisle United.