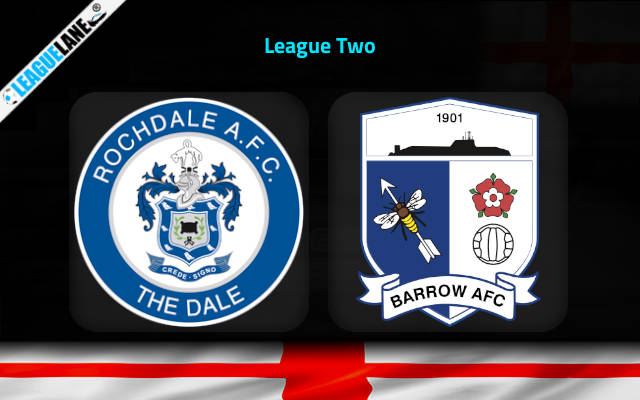 Barrow is at the brink of falling into the relegation zone after drawing a dozen games, which being the highest in the league. They have won only once from the last 10 games played in the league. The Dales lost back to back league fixtures but have also won twice from the last 5 league schedules. Unbeaten in their last 9 home League Two games, Rochdale host the Bluebirds at Spotland Stadium this Saturday.

The Bluebirds are at the 22nd spot on the standing with 33 points from 34 games. They won 7 times in the league while drawing on 12 and losing on 15 other occasions. They scored 31 in total while conceding a sum of 41 which shows some improvement in defense is needed.

In their last game, Barrow drew 1-1 in the league tie with Walsall. The strike force from them have struggled for goals over their previous 6 clashes, netting the disappointing return of just 3 while the overall goal tally against them equals 6.

On the other side, Rochdale resides at the 17th position on the table with 38 points. Of the 33 matches played, they won on 8 games while losing on 11 and drawing on 14 other occasions.

The home team suffered back to back league losses against Carlsile and Sutton while failing to score on both occasion. They have seen their defense breached in 5 of their previous 6 clashes, letting in 10 goals in the process.

Previous matches between the two has averaged 2.5 goals while BTTS has happened 50% of the time.

Rochdale are undefeated in their last 9 home league matches while the visitors have not won away from home in their last 2 league schedules. Also, from the past h2h stats, we also predict a win for the Dales as the visitors are struggling on road recently.