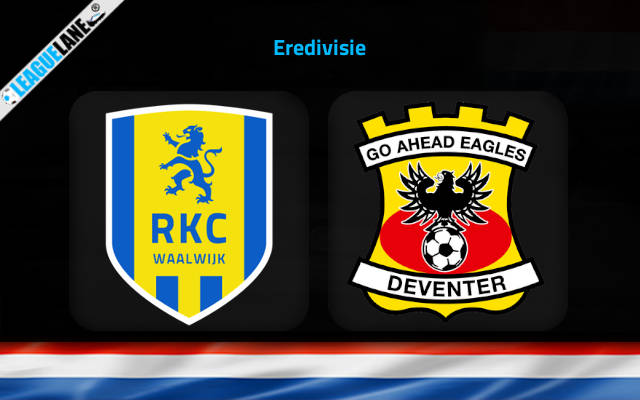 RKC Waalwijk vs Go Ahead Eagles Predictions and Free Tips from our expert tipsters when the teams go head-to-head in Dutch Eredivisie on Wednesday, 1 February 2023.

Waalwijk have improved their performances quite a bit since the season resumed, and they are in pursuit of a top-seven spot at the moment.

Meanwhile, the Eagles are on a two-fixture losing streak in the league at the moment. In fact, they managed to register just four wins in total all through the campaign, and just one of these came on the road in the last five months.

Who will win the match between RKC Waalwijk and Go Ahead Eagles?

Waalwijk have a dominant h2h record against this rival over the years, and on top of that they are currently on a good stretch of performances at home. In fact, they lost just twice at home since April of 2022, and the two defeats came against toppers Feyenoord, and titans Ajax.

On the other hand, the Eagles are on a two-fixture losing streak, and they let in eight goals from their past three match-ups. Moreover, they recorded a single league win on the road since September of 2022.

Likely, hosts Waalwijk are expected to post the three points on the board this Wednesday.

Waalwijk scored twice or more in three of the past five h2h clashes, while they scored four or more in two of these meetings. They also scored two or more goals in five of their past seven appearances at home, while the Eagles conceded six goals from their last two games.

Moreover, they have a single clean sheet on the road in league games, in the past ten months.

As such, expect goals in huge numbers this Wednesday.

Waalwijk kept clean sheets in all but one of their games in all competitions, since the season resumed. They are also yet to let in a goal at this ground after the World Cup. On top of that they kept a clean sheet in the latest h2h encounter too.

Meanwhile, guests Go Ahead Eagles failed to find the back of the net in their latest road trip.

By the looks of things, chances are quite low for goals to come in huge numbers this Wednesday.

Waalwijk are unbeaten at home in the last nine months in all competitions – barring their defeats against titans Ajax, and Feyenoord.

As of now they are on a superb streak at this venue, and are going after a top-seven spot. On top of that, they have a dominant h2h record against this opponent as well.

In fact, they recorded a 2-0 win in the latest h2h meeting, and are unbeaten against them in the last five years. Meanwhile, the Eagles could secure just three wins on the road in all competitions since April of 2022, and they are in no shape to take on the determined hosts.

As such, the Waalwijk to Win at an odd of 2.25 appears to be a great pick for the day.

Moreover, they found the back of the net two or more times in five of their last seven home appearances, whereas the Eagles conceded eight goals from their last three fixtures.

By the looks of things, the Over 2.5 Match Goals wager looks appear to be very promising, at an odd of 1.75.