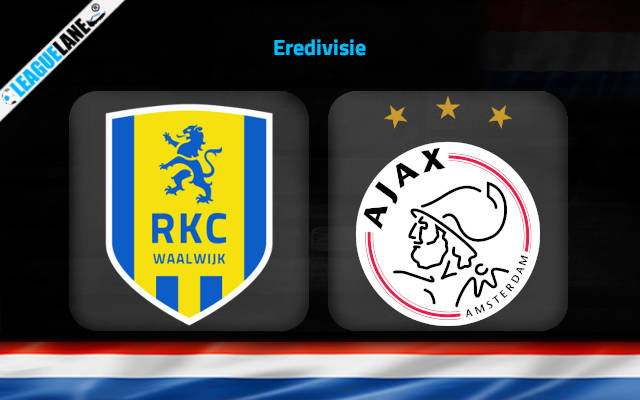 The reigning champions are in quest for a win after drawing 2 previous back to back games before the International break. RKC is at the 14th spot with a much needed victory, but it won’t be so easy as they host the visitors at Mandemakers Stadion this Sunday. A defeat would probably end them at the red zone on the table.

The defending champions is at the top of the table having lost only a single game in the season considering the 12 matches played. They won 8 matches and draw 3 of them while gathering 27 points.

Sitting at the 14th spot, RKC is at the brink of getting relegated having only won 2 matches in 12 games. They have lost and drawn 5 of the games accumulating 11 points.

Ajax has the impressive goals to conceding ratio in Eredivisie this season. They have so far conceded only 2 goals in 12 games, which is absolutely an eye-opening feat and besides that they have netted a massive 37 goals .

Two matches won by RKC, were held at their home ground against Sparta and Willem. However, the visitors have an excellent track record against this foe at Mandemakers Stadion winning 10 in a row.

They have conceded at least one goal from the visitors in the last 10 home games. In addition to that, there have been exactly 2 goals in 3 out of 5 Erik ten Hag’s Eredivisie away games this season.

Waalwijk has been sturdy in recent weeks, but the champions needing points to return to the top of the table are a tight force to stop. Therefore, we are highly backing the away side to win outright here for a cautious return.