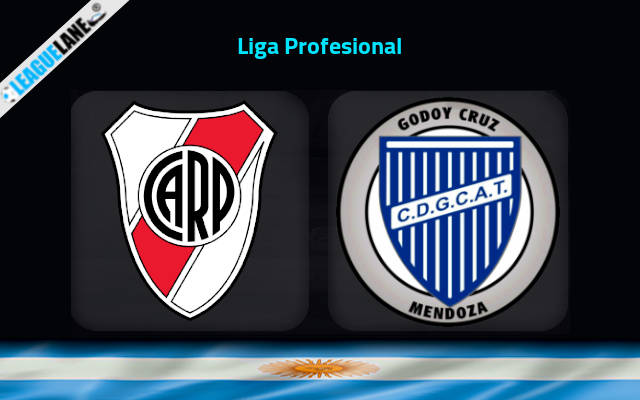 Matchday 7 of Liga Profesional is set for this weekend as River Plate play host to the Godoy Cruz where both these sides differ by 2 points but they are separated by 4 places. These two teams will be seen clashing at Estadio Antonio Vespucio Liberti, this Monday.

Godoy Cruz is at the 7th spot on the standing with 10 points from 6 games. They won 3 times in the league while drawing once and have lost on twice other occasions. The visitors have a solid defensive side, conceding the second fewest goals to date, accounting to just five.

The visitors head into the match following a 1-0 league win over Colon in their most recent outing. In the course of their 6 most recent matches, Favio Orsi’s men have found the back of the net 7 times.

On the other side, River Plate resides at the 12th position on the table with 8 points. Of the 6 matches played, they won, drew and lost 2 games each in the league. At the moment, the task for them will be to retain their domestic title, but they are far off from the top lagging by 6 points.

The current champions failed to score in both legs of their round of 16 clash, losing out to Velez Sarsfield by 1-0 on aggregate at the Copa Libertadores. River Plate has been scored against in 5 of their previous 6 clashes, leaking 7 goals along the way, indicating the fact that they need to work on their backline.

River Plate haven’t lost a home match here and they have won 4 of the last 5 h2hs over this foe. The home team has barely conceded a goal when playing at home and they look forward to do the same here.

Meanwhile, Godoy Cruz haven’t won away from home in the past 4 matches in the league. They are also have left without a victory over this rival in away games against them for the last 2 league games.

We therefore feel that a home win is up for cards.