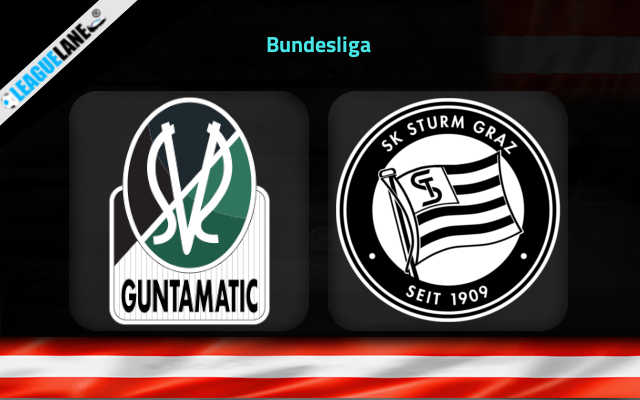 Game week 22 of Austrian Bundesliga brings us the match between Reid and Sturm Graz on Sunday at Ried.

Ried played their last match against Hartberg in their Austrian Cup. Ried score two goals before Hartberg scored their first goal and maintained their lead until the end of the 90 minutes. The match ended in a win for Ried with 2-1 FT score.

Sturm Graz played against Hartberg in their last match, in which Sturm Graz scored three goals while Hartberg could score none. The match ended in a win for Sturm Graz.

Ried has been inconsistent in their form this season. The team’s inconsistency has placed the team 7th on the league table with 28 points. Even their recent matches have achieved mixed results. If the team secures a win, they will have a chance to play in the play-offs to earn their position on the upper half.

Sturm Graz has played well in their matches this season. They are unbeaten in their last six matches, in which three have ended with wins. Their strong form has placed the team in the second position on the league table with 36 points, ensuring their position on the play-offs for Championship group.

Sturm Graz is back in their strong form, earning unbeaten streaks in the matches. Reid will have tough time against an opponent as Sturm Graz because of their inconsistent form.

Looking at the records, the match is most likely to end in a win for Sturm Graz. However, both teams will give their contribution to the scoreboard. Also, Rasmus Winther Hojilund is a major contributor of goals for Sturm Graz and can be expected to score any time in this match.