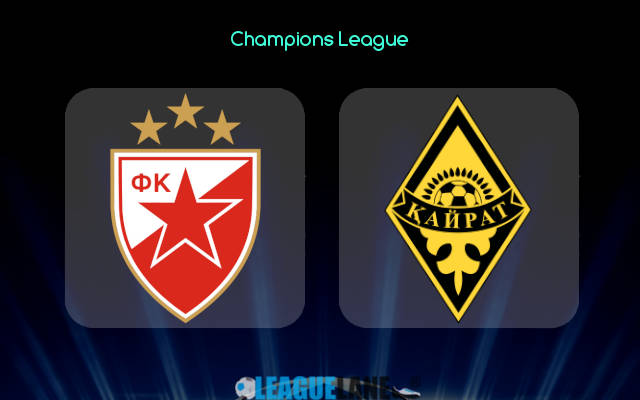 Red Star Belgrade will have a one-goal deficit to overturn on Wednesday evening when they play host to Kairat Almaty in the reverse fixture of their UEFA Champions League Qualifications tie.

Red Star were unlucky to drop the ball in the first leg of the Champions League qualifier against Kairat Almaty.

The Serbian champions were the much better team on the pitch last week in Kazakhstan, but they had to return to Belgrade empty-handed after conceding two goals from crosses.

Their main stars Aleksandar Katai and Geilor Kanga missed golden opportunities on the occasion, but they will have an opportunity to redeem themselves on Wednesday.

Red Star Belgrade are the seeded team here, they have regularly played Champions League and Europa League group stage in the last several years, and they have to be considered genuine favorites here.

Nevertheless, we should still by no means underestimate Kairat who proved quality by eliminating a strong Maccabi Haifa side in the opening round.

Kirill Keker’s men did lose back-to-back Kazakhstan Cup games to Kaspiy and Turan Turkistan but these defeats will count for little if they manage to make another upset in qualifications for the elite continental competition.

Red Star Belgrade should have what it takes to annul this deficit and record a victory that would keep them in the competition. They will have a major boost from the crowd at Stadion Rajko Mitic.

Given the fact they do possess more quality in their ranks, we will back the team led by Dejan Stankovic to finish the job before the potential extra time and beat the Kazakh side by two or more goals difference on Wednesday evening.