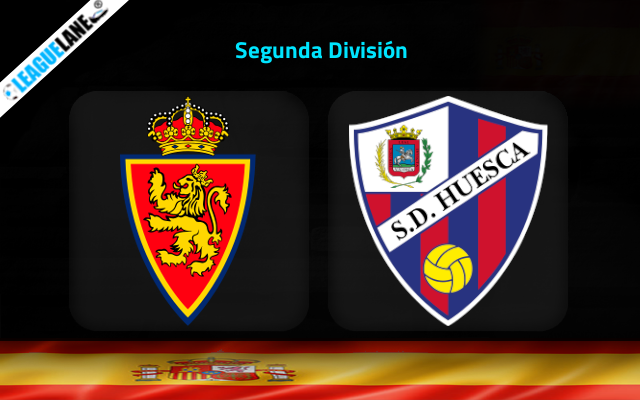 Real Zaragoza vs Huesca Predictions and Free Tips from our expert tipsters when the teams go head-to-head in the Spanish Segunda Division on Sunday, 11 December 2022.

Real Zaragoza will be aiming to climb into one of the safe zone spots in the league standings. They have had a disappointing start to this season, but seem to have gained the much needed momentum of late.

Zaragoza will be facing Huesca in the Saturday’s Segunda Division fixture. The Oscenses are currently having an inconsistent form in the league. They are currently ninth in the league and will be hoping to secure their spot by bagging more points.

The past six overall wins were evenly split with three each for both teams. Their latest meeting had finished in a 1-1 draw.

Zaragoza are having a 100% unbeaten record against Huesca at this venue, barring a single fixture.

Who will win the match between Real Zaragoza vs Huesca?

Based on the current form and recent h2h stats, Zaragoza has a slightly higher chance of sealing a win. They are unbeaten in four of their last five home matches too.

On the other side, Huesca’s lack of impressive stats for winning further boosts the home side’s chances. There is no reason to back Huesca, who have not won in eight of their 9 road trips this season.

Around 75 % of matches played by these two teams this season had fewer than 2.5 goals ft. Going on, neither of them owns a strong attacking line.

Do also note that, the past four head to head meetings between these two teams were low-scoring matches. Therefore, expect goals under 2.5 goals in this fixture.

Since Huesca has failed to score in two of the last three road trips, we don’t quite see the possibility of the both teams to score option here.

Bookies have priced Real Zaragoza to win at 2.05 odds. The reason for choosing it as the main bet is the current form of both the teams at respective patches.

We like to back the Under 2.5 goals as the second bet considering the goal trend of both these LaLiga 2 outfits so far in this campaign.