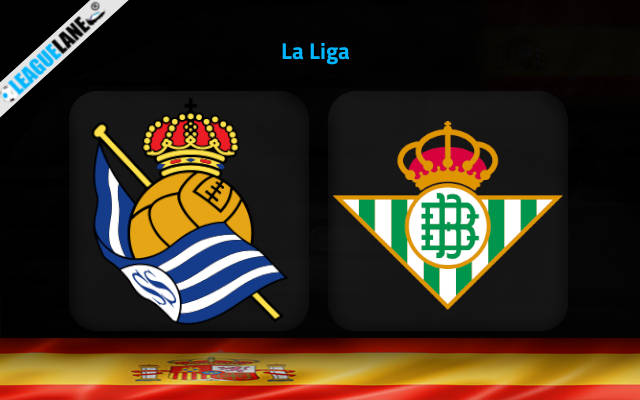 Real Sociedad and Real Betis return to the pitch from their mid-week’s UEFA Europa League duties on Sunday evening when they take on each other in the 12th round of La Liga.

The two outfits are only separately by two points in fourth and fifth place of the league standings, meaning a lot will be at stake this weekend at Reale Arena.

Real Sociedad terminated their eight-win streak across competitions last Saturday when they fell 1-0 away at Valladolid.

They fired 20 shots at Estadio Jose Zorrilla last weekend but only 2 went on target. It was also the third game out of last four Sociedad played in the league that finished in the 1-0 score.

We would not be surprised to witness a similar result this time around against Real Betis who own one of the best defensive records in La Liga.

Los Beticos only conceded eight goals in eleven league fixtures this term. However, we must say they have been in sort of a crisis of late, winning just one of the previous five league matches.

The latest slip-up for Manuel Pellegrini’s troops came last Sunday when they fell 1-2 at home to Atletico Madrid.

Los Beticos have failed to find the net in three consecutive away matches despite facing the likes of Celta Vigo, Valladolid, and Cadiz in the process.

Both Sociedad and Betis looked better defensively than offensively recently. Three of Sociedad’ previous four league matches ended in a 1-0 scoreline, while Real Betis did not score a goal in three successive La Liga matches on the road.

We see the value in backing draw at the half time and at the end of the game at the 5.00 odds, while you can alternatively go with 1-1 as the correct score pick at the 6.50 odds.