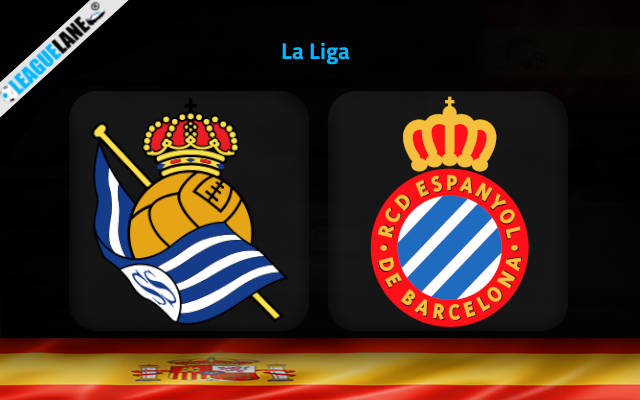 Despite their slow start to the league campaign, Sociedad are still one of the best teams in the Spanish top flight – and particularly so at their home. This Sunday, they will be determined to go after a victory at the Reale Arena, against the struggling Espanyol.

Espanyol finished 14th in a table of 20 the previous season, and they managed to register just ten wins all through the campaign. It also needs to be mentioned that they had a lead of just four points over the relegation cut-off.

Moreover, they let in goals in plenty all through the run of the tournament too.

This time around, they are placed 16th in a table of 20, and recorded a single win till now.

Meanwhile, Sociedad are in possession of the 11th spot in the league table, and they lost just twice so far. One of these losses came against Barcelona as well.

Moreover, they secured a sixth-place finish the last time around in the league, and thus managed to gain entry into the Europa League.

In addition, only three squads let in fewer goals than them in the entire tournament. Two of these teams were Real Madrid, and Sevilla.

Going on, they also have a dominant h2h record against this rival over the years.

By the looks of things, expect a victory for Real Sociedad this Sunday at the Reale Arena.

Sociedad were unbeaten in seven of their previous eleven overall fixtures, and in the process they went on a two-game winning streak.

It was quite unfortunate for them that they were pitted against Barcelona and Atletico Madrid in their two home games so far this season in the La Liga.

However, this weekend, they are lining up against a rather inferior squad, and count on them to make the most of it.

Meanwhile, Espanyol were winless in 15 of their past 18 overall fixtures, and in the process they went on two separate two-game losing streaks, as well as another three-match losing stretch.

Moreover, they were winless in 14 of their past 15 road trips too.

Considering these observations, expect a win for Sociedad this weekend.

Tips for Real Sociedad vs Espanyol