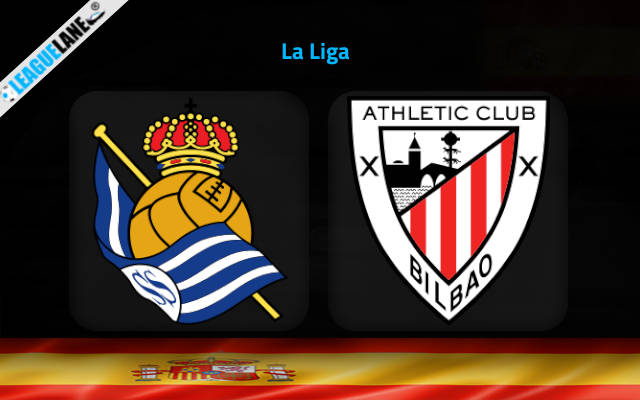 Real Sociedad vs Athletic Bilbao Predictions and Free Tips from our expert tipsters when the teams go head-to-head in Spanish La Liga on Saturday, 14 January 2023.

Sociedad have simply been on fire lately. They have a 100% winning record since the World Cup break, and are placed third in the table at the moment – just below the two titans – Barcelona, and Real Madrid.

Meanwhile, Bilbao are in their pursuit of an entry into the top-six. They too are on an impressive run, but it appears that the break has affected their momentum quite a bit. They drew both their league games after the season resumed – thus dropping four valuable points.

Bilbao won the latest encounter, and that too by a heavy margin. The game ended 4-0 in their favor at home.

However, over the years, Sociedad have had the superiority in such meetings. And at this venue they have been impressively dominant over the past decade. In fact, only once have the guests won here since 2011.

Who will win the match between Real Sociedad and Athletic Bilbao?

Both teams are amongst the best in La Liga, and are contenders to quality for the European spots. However, recent form slightly tips the scales in the favor of the hosts – Sociedad.

They are on a winning streak at the moment, and have a better h2h record at this venue in the past decade. On the other hand, Bilbao failed to win all of their La Liga fixtures after November.

Most importantly, they won just twice on the road this whole La Liga season. The two wins came against the 20th placed Elche, and the 18th placed Cadiz.

Sociedad scored two or more goals at home in a league fixture just once since September. In fact, even in previous h2h clashes, they have not shown an affinity to score in plenty. Only one of the past five h2h encounters managed to have more than two goals.

Going on, Bilbao are also considered to have one of the best defenses in the La Liga. To be precise, only Barcelona, Real Betis, and Villarreal have let in fewer goals than them.

Likely, goals are not expected in huge numbers this Saturday.

Not only did Sociedad win all of their last four games, but they managed to keep clean sheets in all these fixtures as well. And on top of that Bilbao failed to find the back of the net in their last two league games.

As things stand, it is unlikely that both teams will find the back of the net this Saturday.

Sociedad are on a winning streak, and also have a superior h2h record at this venue over the years. They are placed third in the table at the moment, and will be eager to strengthen their position in the podium.

Going on, Bilbao are going through a period of poor form. They are finding it hard to score goals, and have been poor on the road right from the start of the season.

It appears that Sociedad are a great pick to win this weekend at an odd of 2.60.

However, considering the defense of Bilbao in mind, do not expect a high-scoring affair this Saturday.