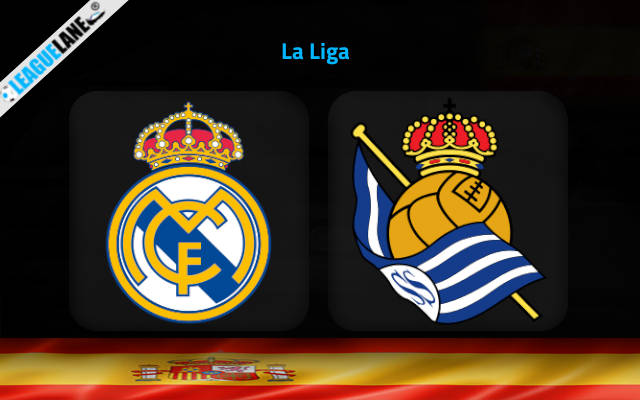 Real Madrid vs Real Sociedad Predictions and Free Tips from our expert tipsters when the teams go head-to-head in Spanish La Liga on Sunday, 29 January 2023.

European champions Real Madrid are giving a tense chase to arch-rivals Barcelona, for the top-most spot. They are high in confidence, after they completed yet another comeback win against Atleti the last game week in the Copa del Rey.

Meanwhile, Sociedad could make some real problems for the 14-time UCL winners this Sunday. They are the only team in the league to have won the last five fixtures in a row.

The latest encounter between the two ended in a 4-1 win for the Royal Whites, and they also won three of the past five clashes. Note they are also unbeaten in the past three years.

Going on, Sociedad registered a single league win at this stadium in the past 19 years.

Who will win the match between Real Madrid and Real Sociedad?

Sociedad surely are on a superb run at the moment, but let’s not forget the fact that they are taking a trip to the famed Santiago Bernabeu, to take on the reigning European champions.

Real Madrid just recorded a 3-1 win over Atletico Madrid, after trailing 0-1 for most of the game. They are high in confidence, and will be gunning for a win this weekend as well.

And most importantly, they have a stupendous h2h record against this opponent over the years – including the 4-1 win in the latest h2h encounter.

The Royal Whites have scored the most number of goals in the competition so far, and they scored two or more goals in 12 of their past 16 games. They also did the same in 12 of the past 14 h2h meetings at this venue.

Meanwhile, Sociedad scored two or more goals in every one of their league games on the road after October 2022.

It appears that chances are quite high for goals to come in plenty this weekend.

For all their domination, the Los Blancos have not been a stable defensive side this season. They have a single clean sheet from the past six fixtures, and had just two clean sheets from the past eleven h2h meetings.

And considering the form of Sociedad as well, we infer that goals will come from either end of the pitch.

The current Spanish champions have an impressive h2h record against this rival over the years. They won 21 of the previous 28 overall h2h meetings, and lost a single league clash at this ground in the past 19 years.

They are also at home, where they have a 100% winning record this league season, barring just two draws.

Sociedad are in great form, but do note that they just were eliminated by Barcelona from the Copa del Rey, and their momentum has taken a huge hit.

Count on Real Madrid to deliver a hard-fought win this weekend at their home. The odds for the same are placed at 1.75.

Going on, the latest h2h meeting was a five-goal thriller. In fact, 17 of the past 22 h2h clashes had three or more goals, and importantly both these squads are in terrific form at the moment – especially in terms of offense.

The inference is that goals will come in plenty this Sunday. The odds for Over 2.5 Match Goals are placed at 2.00.