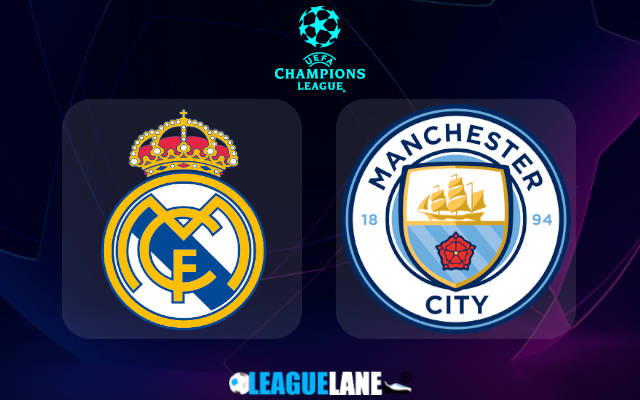 Manchester City travel to Real Madrid for the second leg of the 2021/22 Champions League semifinal with a one goal lead.

The tie is well balanced though Pep Guardiola will be aggrieved to have only taken a 1-goal lead from the first leg at the Etihad.

For Real Madrid, this is familiar territory and they know what to expect from the Citizens having come back from losing positions to kill off ties against Chelsea and PSG.

Manchester City warmed up for this crucial fixture by thrashing Leeds United 4-0 on the weekend to stay above Liverpool in the Premier League title hunt. Though the lead over the Reds stands at a single point.

Meanwhile, Madrid faithful are in a party mood after the 4-0 thumping win over Espanyol to clinch the La Liga title for a record 35th time. Carlo Ancelotti thus became the only manager to win all 5 major European titles.

Manchester City have bagged three straight wins against Real Madrid after the 4-3 win at the Etihad. Only Ajax and Bayern Munich had won straight games against the Los Blancos.

Five of the overall 7 Champions League meetings between the teams saw 3 or more goals with both teams scoring.

This is the third Champions League semifinal appearance for Manchester City. They were beaten by Real Madrid 1-0 on aggregate in the first back in 2015/16.

Manchester City will be aiming for their first Champions League triumph, 14 years into the heavy investment by Abu Dhabi United Group. Meanwhile their domestic rival Chelsea had won this trophy twice, in the 2011/12 season under Roberto Di Matteo and last season under Thomas Tuchel with similar investment.

This is the second Champions League semifinal appearance for Real Madrid since they completed a hattrick of trophies in the 2017/18 season.

The tie sits in perfect balance and it has the potential to go either way. We have seen two sides of Real Madrid this season. One is the never die attitude against the likes of PSG and Chelsea, the other totally blown away by an elegant Barcelona at this ground by a four-goal margin.

Manchester City are bookies favorites, but they too had problems while coming up against good attacking sides. The defeats against the likes of Liverpool, Tottenham, PSG and Leipzig can be quoted as excellent examples for the same.

However, goals are a guarantee whatever the full-time result of this match is going to be. Both teams have problems at the back, while their attacking unit can unlock the toughest of defenses.

We will take the over 2.5 goals as the safe bet for this Champions League semifinal fixture. While brave punters can take a shot at the both teams to score in the second half.

Karim Benzema to score anytime is without a doubt the value bet for this fixture. The Frenchman will be looking to add to his tally of 9 goals from the last 4 Champions League matches at the Bernabeu on Wednesday.