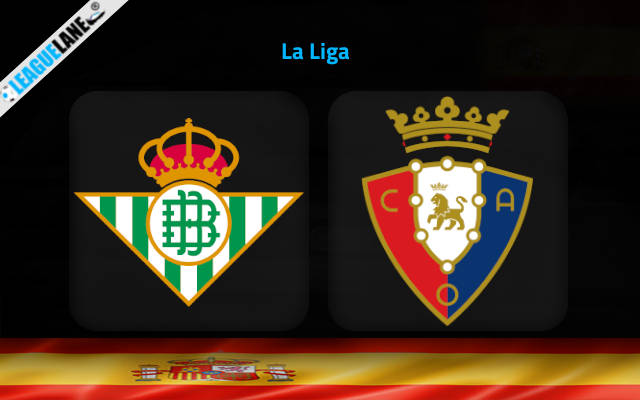 Betis were one of the very best teams in the Spanish top flight the last season and as a result they had secured a 5th place finish at the end of the campaign. Meanwhile Osasuna had to settle for a 10th place finish in the same league table.

This time around both teams have started their respective seasons on impressive winning streaks. Both of them are finding the back of the net in plenty and as a result have built considerable momentum.

Betis had missed out on a top-4 finish the last season by a margin of just 5 points and they were one of the handful of teams that had managed to score more than 60 goals in the whole tournament.

It also needs to be mentioned that they had consistently found the back of the net in front of their home crowd as well. And it gives them confidence that they have been able to carry forward this form into the new season.

Going on, Osasuna seem determined to establish themselves as one of the best in Spain. They have a 100-percentage winning record so far in the new campaign and they have managed to show this form even in road games.

Moreover, majority of previous head-to-head clashes also have had goals in huge numbers and taking into account all these observations it is expected that we are about to witness another high-scoring affair this weekend.

Betis are on a 3-game winning streak and they are on a 4-match unbeaten run as well. It also needs to be mentioned that they had scored 2 or more goals in all 4 of these fixtures.

On the other hand, Osasuna are on a 5-match winning stretch and they had managed to find the back of the net twice or more in 4 of these games.

Moreover, previous head-to-head meetings also have had goals in plenty. Taking into account these observations, anticipate a goal-fest this weekend.

Tips for Real Betis vs Osasuna