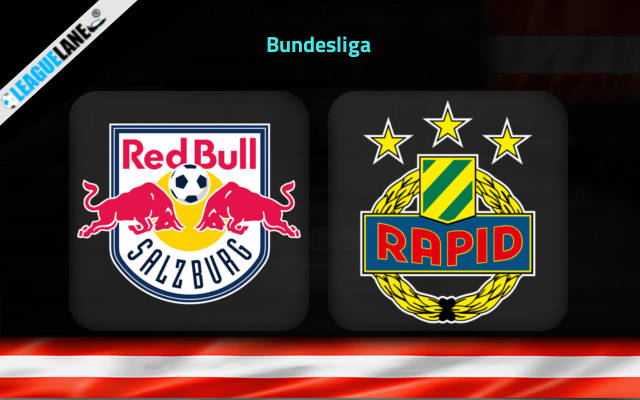 With 3 consecutive wins, Red Bull Salzburg are leading the Bundesliga table and aims to extend it as they face off the Play Off leaders Rapid Vienna. They will be facing each other this Sunday at Red Bull Arena.

The Red Bulls are at top flight in Bundesliga with 33 points from 24 games. They won 19 times in the league while drawing on 4 and losing only once. They have scored 55 goals in total while conceding a sum of only 14 which shows how profound their defense and offense lineups are.

Red Bull Salzburg are hoping to win again following the 4-1 league triumph over Wolfsberger AC. They have also reached the finals of OFB Cup, having defeated the same Wolfsberger by 2-1.

On the other hand, Rapid Vienna resides at the 4th position on the table with 19 points. Of the 24 matches played, they won 9 games in the league while drawing 8 times and losing on 7 other occasions. They have been currently on a 5-game unbeaten run in the league.

In their last fixture, Rapid Vienna drew 1-1 in the league with Austria Vienna. Ferdinand Feldhofer’s men have slotted home a total of 11 times in the course of their latest 6 matches. The total number of goals that have been scored against them during the same comes to 6.

RB Salzburg is currently on a 6-game unbeaten run across all competitions. They have never lost at home this season, winning 11 out of the 12 games played so far.

Salzburg are also undefeated in the last 13 h2hs with winning the last 6 h2hs in succession.

Rapid Vienna won only 25% of the away games this season. Therefore, a clear win for hosts with over 2.5 goals can be expected this weekend.