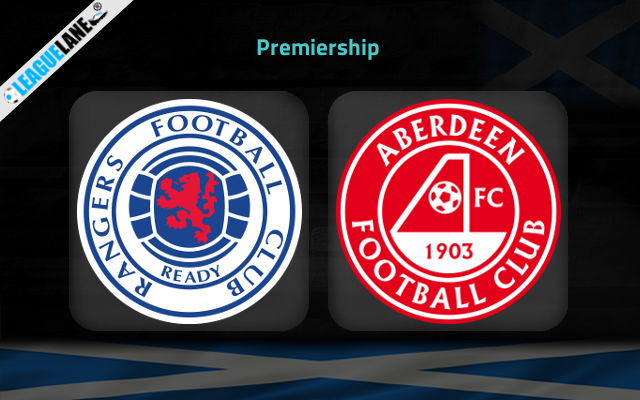 Rangers slipped up for the third time this season last weekend when they only drew 1-1 at home to Livingston.

The team led by Giovanni van Bronckhorst can even be satisfied with the point from that tie having only found the equalizer in the first minute of stoppage time at Ibrox Stadium.

They fired 24 shots last weekend but 21 of these went wide. The Gers are now four points shy of bitter city rivals Celtic at the top of the Premiership standings.

To make matters worse for Rangers, they are now set to play host to in-form third-placed Aberdeen on Saturday afternoon, right in the midst of their UEFA Champions League ties against Napoli and Ajax.

Aberdeen will enter this match in much higher spirits. They claimed third successive win across competitions last weekend, beating Motherwell 1-2 on the road.

The team’s top two scorer Bojan Miovski and Luis Henrique Duk were both on target in the mentioned game.

They have 13 goals combined in eleven rounds of the Premiership this term and will certainly represent a threat to Rangers’ back line on Saturday.

Aberdeen have played attacking-minded football of late. Each of their previous six outings in all competitions provided at least three goals.

We certainly expect to see the high-scoring trend continued when they come face to face with Rangers who have the division’s top scorer Antonio Colak in their ranks.

We are very much tempted by Aberdeen’s success at Ibrox Stadium on Saturday. The away win is priced up at the odds of 7.50 while the more conservative tipsters can try with Aberdeen not to lose by two or more goals difference here at the 1.83 odds.

The value is bigger with the Over 2.5 goals FT & Both Teams To Score bet at the 2.20 odds, while we also like in-form Bojan Miovski to score anytime for the visitors at the 4.00 odds.