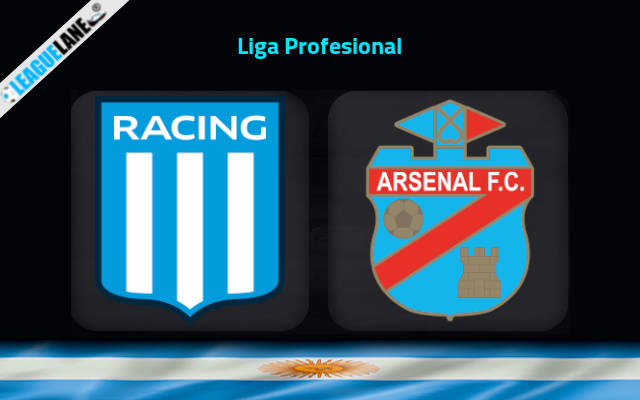 Round 8 of Liga Profesional is set for this weekend as Racing Club play host to Arsenal Sarandi where both these sides differ by 3 points but are separated by 5 places. These two teams will be seen clashing at Estadio Juan Domingo Peró, this Tuesday.

Racing Club is at the 7th spot on the standing with 14 points from 8 games. They won 4 times in the league while having drawn and lost 2 times each. The hosts has put together a good run of form and has one of the best offensive sides in the league.

The hosts will play in this fixture after a gaol-less Superliga drawn result against Newell´s Old Boys. Racing Club have kept the defense tight, seeing the tally of goals that have gone past their goalkeeper during their past 6 outings stands just four.

On the other hand, Arsenal Sarandi resides at the 13th position on the table with 11 points. Of the 8 matches played, they won 2 times in the league while drew on 5 and lost on one other occasion. In the last 5 matches for the visitors, 4 of those games has ended with both teams scoring and about 67% of all matches, this season has seen BTTS landing.

In their previous fixture, the visitors drew 1-1 in the Superliga tie with Platense. In their previous 12 clashes, Arsenal Sarandi have bagged the sum of 9 goals while have also been scored on each one of those occasions.

Racing Club is the best home team in Superliga, where they won all of the 4 matches played. They have not conceded a goal at home so far in this tournament, while netting 10 in total.

Meanwhile, Arsenal Sarandi have not won against Racing Club in games played away from home for the previous 5 matches in the league. Moreover they won just one away game from the 4 played here.

By the looks of things, expect a victory for the hosts this Tuesday.