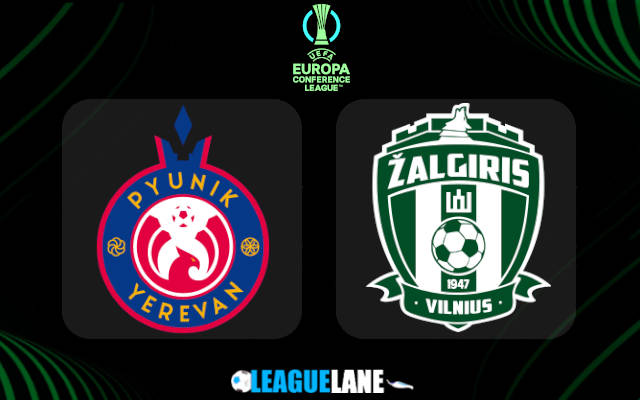 Both Pyunik and Zalgiris are determined to go after the top-most spot, and currently both are stuck in the mid-table.

Toppers Basel are in great form, and have a 100% winning record so far. This is quite a threat for the two teams in the mid-table, and they are under pressure to go after a win at any cost this Thursday.

Pyunik scored the most number of goals in the group after the toppers, and they also have a 100% winning record, barring their game against the first-placed Basel.

Going on, Pyunik are also the reigning Armenian champions, and they scored the second-most number of goals in the competition the last season.

This time around they are placed fourth in the table, and only a handful of teams have scored more goals than them in the competition.

Meanwhile, Zalgiris are placed third in the group table, and though they are yet to find form in the Conference League, they are a dangerous opponent to deal with.

They are current champions of the Lithuanian top flight, and the last time around they were almost on fire. They won the title with a nine-point lead at the top, and they scored the most number of goals of all the teams in the competition, as well as conceded the least.

They have the confidence of delivering such a triumph, and once again they have raced to the top of their league table.

By the looks of things, expect a high-scoring affair this Thursday between the two teams.

Pyunik won three of the last four overall fixtures, and they scored 11 goals in the process. Do also note that they were winless in eight of their past eleven overall match-ups.

And importantly, they are on a five-game winning streak at home.

On the other hand, Zalgiris are on a three-game winning streak at home, and they scored six goals in the process. Moreover, they were also unbeaten in 46 of their past 50 fixtures.

Taking into account these observations, expect a goal-fest this Thursday between the two.

Tips for Pyunik vs Zalgiris