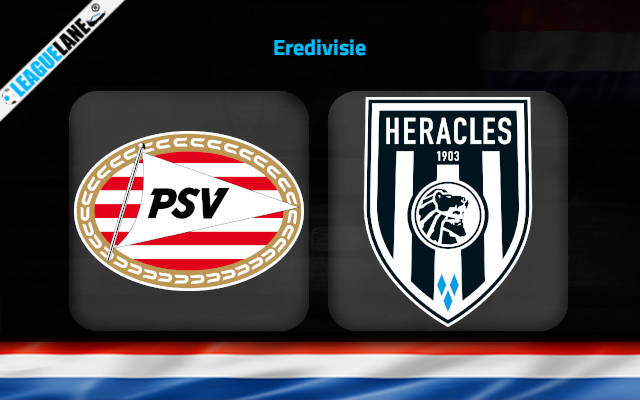 PSV are in an incredible title race with Ajax. The team have recovered from the slip ups they suffered earlier in the year and would hope the league leaders drop points in the remaining third of the season while preventing such events for themselves.

In their most recent fixture, they took all three points against Sparta Rotterdam away from home in a 2-2 score line fixture, after their opponents were reduced to ten men in the 53rd minute.

This marked the club’s 3rd consecutive win which was preceded by back to back losses. Currently, the club finds themselves two points behind Ajax in 2nd position.

Following a shambolic run of games in November and December, Heracles have recovered well and are pushing higher in the table by gaining a fair bit of points in recent weeks.

They registered a comfortable 2-0 win at home against relegation bound club PEC Zwolle in their most recent league match. The result marked their 2nd win in three league outings.

Thus, with seven points from their last five Eredivisie fixtures, the club is now 11th in the league, seven points clear of the relegation playoffs spot.

The hosts have won seven of their previous nine league matches at home; their opponents meanwhile are winless in away matches in nearly a year and have taken just two points from those games this season.

Furthermore, the preceding four league matches at this venue witnessed three or fewer goals, while none of Heracles’ previous eight league matches on the road involved more than three goals.

Consequently, expect a home win this Sunday in a match that is unlikely to witness more than three goals.

The away side has failed to score in the 2nd half in any of their last eight league matches on the road. They are likely to get dominated in the second half this weekend.