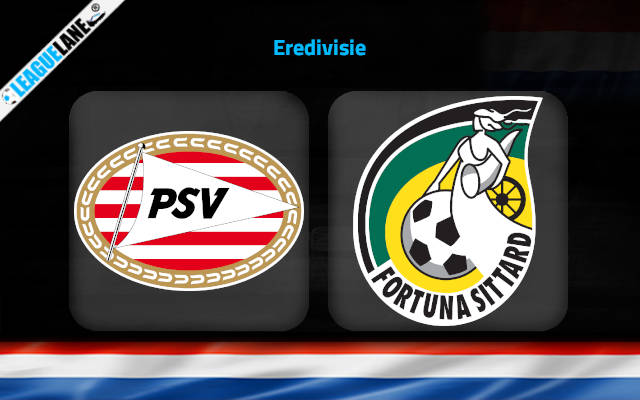 PSV is on a 5-game winning streak in the league while unbeaten in the last 10 games across all competitions. They lack only 2 points with the league leaders Ajax and are also in the zone for Champions League qualifier spot.

Sittard won their previous game ending their back to back losses in the league. They share the same points as Willem II who are in the zone for relegation.

This upcoming 27th Round of Eredivisie is scheduled at Philips Stadion in Eindhoven where Fortuna will be visiting this Sunday.

Red and Whites are in the 2nd spot on the standing with 61 points from 26 games. They won 20 times in the league while drawing once and losing on 5 other occasions. They scored 63 in total while conceding a sum of 31 which shows their remarkable attacking front.

PSV won their 5th game in a row against Utrecht by 1-0 in the previous week. They have been prolific in their 16 most recent clashes in the league, scoring more than once on all of them.

On the contrary, Sittard resides at the 15th position on the table with 22 points. Of the 26 matches played, they won 6 games while drawing on 4 and losing on 15 other occasions.

Fortuna Sittard go into this encounter following on from a 1-0 Eredivisie win as they beat Willem II in their most recent match. In the course of their 6 previous matches, Sjors Ultee’s men have fired home 6 times therefore earning them the goals per game average of 1.

We feel that a home win is highly likely as PSV haven’t lost in the league to Fortuna Sittard in their last 12 matches with the past 9 h2hs ending all in victory. Furthermore, they are the second best team to perform best at home in Eredivisie after Ajax.