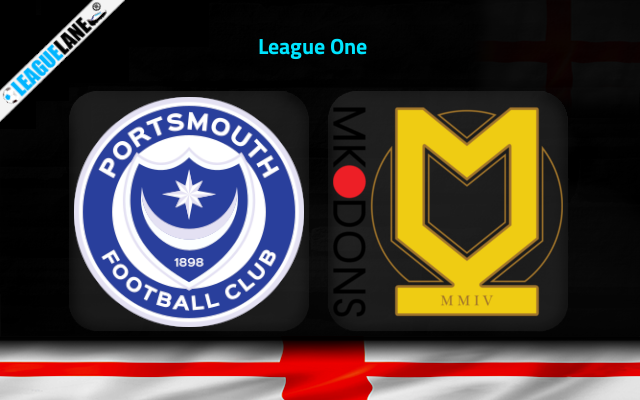 Portsmouth vs MK Dons Predictions and Free Tips from our expert tipsters when the teams go head-to-head in the England League One on Saturday, 17 December 2022.

Portsmouth have failed to seal a win in the last five league matches. Their latest League One fixture against Wycombe recorded as their first defeat in last five encounters. A win is essential for them to secure their spot in the safe zone.

They will have a great chance on Saturday to end their current winless streak of five games as they play host to MK Dons, who have had an inconsistent form since the beginning of this season. Moreover, MK Dons are positioned second from the bottom of the table.

Portsmouth won five, drew two and lost three of the last 10 encounters against MK Dons. The latest meeting had finished in a 3-2 win for Portsmouth.

Portsmouth is having a 100% unbeaten record at this stadium against MK Dons, barring a single fixture. In fact, MK Dons lost four of the last five clashes against Portsmouth here.

Who will win the match between Portsmouth vs MK Dons?

We are expecting a victory for Portsmouth. Because, they have an impressive form at home lately. They are yet to make mistakes at home so far this season.

On the other side, MK Dons are having an inconsistent form on the road too. They were winless in three of the last four road trips.

Portsmouth have been letting in goals in the past few home fixtures. Most of them turned out to be a high-scoring affairs due to the involvement from their opposition in goal-scoring.

Since MK Dons have scored in four of the last five road trips, expect this match to have over 2.5 goals ft.

The defensive breach of Portsmouth is mentioned earlier. As MK Dons owns one of the worst defenses of this season, expect goals from both ends.

Considering all these observations, we are expecting a victory for the home side Portsmouth at 1.91 odds.

As an alternative, we like to back the both teams to score option at 1.80 odds.