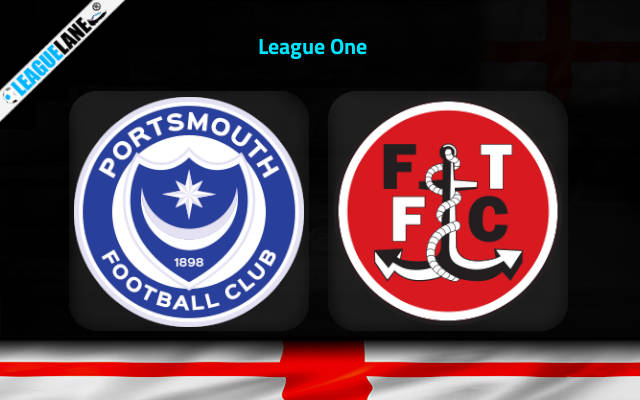 Portsmouth have won each of their last two league games at Fratton Park, and will be looking to record three successive victories there for the first time since a 7-game winning run between December 2019 and February 2020. Fleetwood lost the last fixture which ended their 4 consecutive draws in the league. With only 2 points more from the relegation group, the Cod Army will take a roadtrip to Fratton Park this Saturday for the 36th round of League One.

Pompey is at the 11th spot on the standing with 47 points from 31 games. They won 13 times in the league while drawing on 8 and losing on 10 other occasions. They scored 40 in total while conceding a sum of 32 which shows that they tend to let in more often.

Portsmouth had a surprising 2-1 League One win to Shrewsbury in their last outing marking a hat-trick win in the league. They couldn’t manage to hold on for full time recently, as they have failed to prevent opponents from scoring in 5 of their previous 6 matches, giving up 8 goals during the time.

On the contrary, the Cod Army resides at the 19th position on the table with only 32 points. Of the 31 matches played, they won 7 games while drawing on 11 and losing on 13 other occasions. Their total goals to conceding ratio stands at 44:53 displaying their far from perfect defense.

Fleetwood lost the last game against Cheltenham by 0-2 which marked their 7th game in a row without seeing a victory. A relatively low number of goals have been struck between them and opposing teams. The overall average number of goals per game within that spell is a mere 2.67.

We feel that a home win is highly probable as the visitors are left without a victory over Portsmouth when having played them away from home in the previous 4 league games and also they are without an away win for the past 3 league schedules.