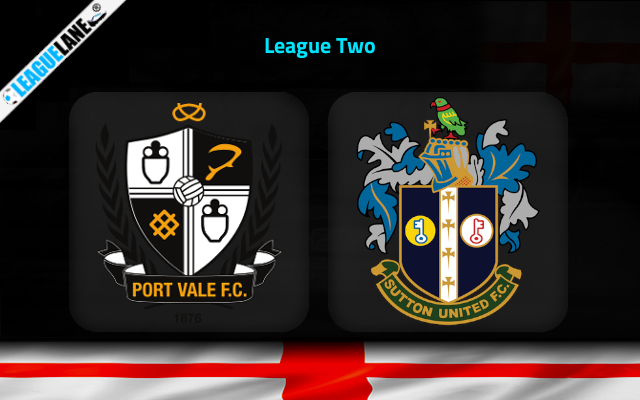 Port Vale have been recording pleasant displays in the league of late. As a result, they are now occupied at 9th on the table with a total of 60 points, one point away from the safe zone. They possess an impressive offensive and defensive lineup.

Port Vale recorded a goalless draw against Exeter on road in their most recent league fixture. With that draw, they are now on the back of four subsequent unbeaten league fixtures. They have collected a total of 10 points from that four unbeaten displays.

Meanwhile, Sutton sits at the edge of the safe zone with a total of 61 points. They are points level with the safe zone occupier Swindon and what keeps them away is their goal recordings. Therefore, they have a decent offensive and defensive lineup.

Sutton won 1-3 against Oldham on road in their most recent league affair. They recorded the above win after conceding three back to back winless fixtures in the league. They will be hoping to make that win count to run further in the league with the much needed momentum.

By the looks of things, Sutton and Port Vale sitting at 8th and 9th on the table respectively, possess the potential of delivering a competitive encounter. We expect such when they meet at Vale Park on Saturday in a League Two fixture.

Port Vale have been enjoying a consistent form in the league lately. At home, they have managed to stay unbeaten in each of the past 7 league fixtures. They scored a clean sheet in four of those.

On the other side, Sutton lost two of the past three on road league fixtures. They have leaked goals in each of their past 5 league affairs on travels.

Analyzing the above stats, we expect a win for the hosting Port Vale against this Sutton outfit when the referee blows the final.