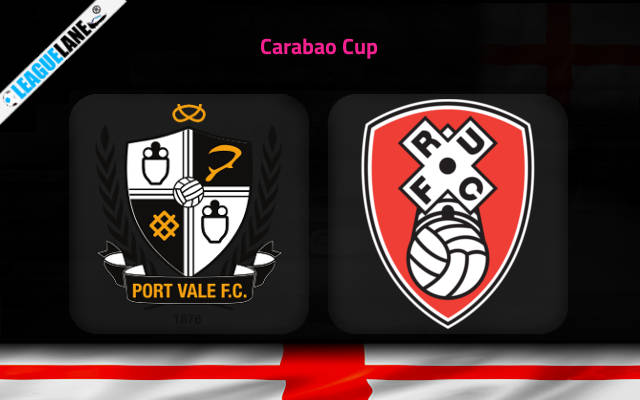 Port Vale were having a decent form in the past League Two season. As a result, they claimed the fifth spot of the league table and succeeded in claiming a spot to the League One battle this season by sealing victories over other League Two outfits in the promotion match-ups.

Meanwhile, Rotherham were having an excellent form in the past League One season. As a result, they claimed the second spot of the league table to gain the promotion to the Championship battle. They had an excellent offensive and defensive line-up in the past season too.

Rotherham will travel to Vale Park to face the hosts Port Vale in a Carabao Cup knockout fixture on the coming Wednesday.

We can see Port Vale recording inconsistent displays in the pre season friendlies. Their opponents were not that strong. They lost to Kidsgrove leaking three unanswered goals.

Following that, Port Vale opened up with mixed displays this League One season. They won 2-1 against Fleetwood at home in the first fixture and conceded a demotivating 4-0 defeat against Exeter on the road. Also, they lost a couple at home when looking at the past four.

On the other side, Rotherham played a set of friendlies post the League One season 2021/22. they faced outfits like Crewe, Doncaster, Mansfield etc in those pre season friendlies and managed to record positive outcomes. Their unbeaten outcomes with League Two outfits wont count much here.

Rotherham possesses an excellent form on the road at present. They are currently following an unbeaten form for nine away games. Their offensive side were impressive in those games.

Considering all the above stats, we are left to back Rotherham to seal a win from this fixture against Port Vale on Wednesday.