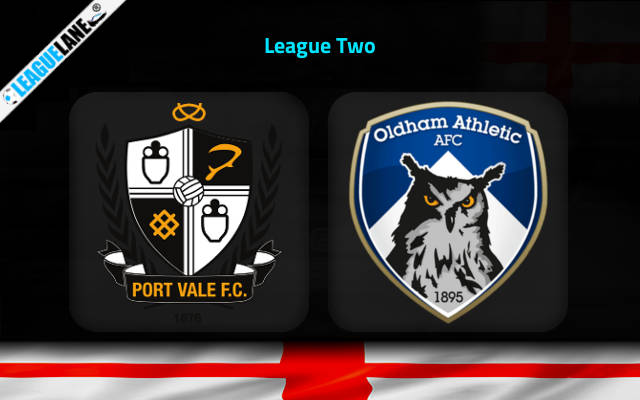 Port Vale has been on top form in their recent matches. The team has not lost in their last seven matches. From the last ten matches, the team has got seven wins, two draws and one loss. The team currently stands third on the league table and has got 69 points to their name.

Port Vale played their last match against Salford City. Port Vale scored their goal in the 59’minute, which put them in the lead. The team maintained their lead for the rest of the match, ending the match with 0-1 FT score.

Oldham Athletic played their last match against Stevenage, in which Oldham scored their goal within twenty minutes of the first half and maintained their lead until the end. The match ended with 0-1 FT score.

With the win in the last match, Oldham has won in their last two consecutive matches. The team had shown trouble with their form in the recent matches. Their win against Leyton Orient came after a cold streak which had lasted for over eight matches. The team now sits 22nd on the league table with 34 points to their name. The team is only 3-points ahead of the first team on relegation zone.

Port Vale has played well in their recent matches and is unbeaten in their last seven matches. Their strong performance makes them a formidable opponent for Oldham. Oldham, at the moment, has a win-streak which they will hope to maintain.

Port Vale has played well in their home matches. They have not lost in the last eight matches and have scored over 1.5 goals in four of the last five matches. Oldham’s away matches have not produced the results as they had hoped for. However, their last win ended the team’s cold streak, which lasted for over five matches.

Port Vale is without doubt the better team of the two and is most likely to seal the win. We will surely have a heated affair in this match and can expect over 2.5 goals in the match.