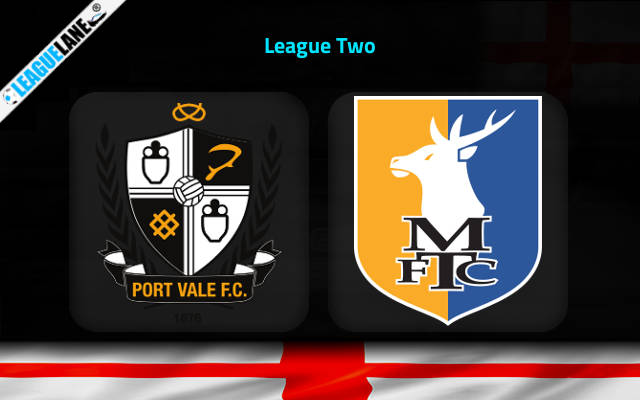 Game week 37 of League Two brings us the match between Port Vale and Mansfield Town on Tuesday at Stoke-on-Trent.

Port Vale played their last match against Crawley Town. Crawley scored their one and only goal within the first ten minutes of the match. However, they couldn’t stop Port Vale in their goals scoring. The match ended in a win for Port Vale with 4-1 FT score.

Mansfield Town played their last match against Tranmere Rovers. Mansfield hoped the match would end in a draw when they scored their second goal in the 90’minute. But Tranmere scored one more goal at the last minute, ending the match in a loss for Mansfield with 3-2 FT score.

Port Vale has shown some good form in their recent matches. From the last ten matches, the team has won in four, drawn in five and lost in three. They have moved up the table and sit 10th in the league table with 53 points.

Mansfield Town’s loss in the last match has put an end to their 14-game unbeaten streak. They have shown some tremendous improvement in their form since the end of November. From the last ten matches, the team has won in six of the matches and has lost in only one. Their performance has moved the team up the table to the 9th position with 56 points from their matches.

With Port Vale and Mansfield showing almost the similar performance in their matches, the match will definitely be a tight one. Both teams have scored in their recent matches and can be expected to score in this match as well. Mansfield, however, has scored over 1.5 goals in their latest matches, making it possible for the match to end with over 2.5 goals.

Port Vale has the slight advantage of playing in their home ground, where they have not lost in the last five matches, while Mansfield has only one win to show from the last five road tripes.

The match is most likely to end in a win for Mansfield Town or in a draw.