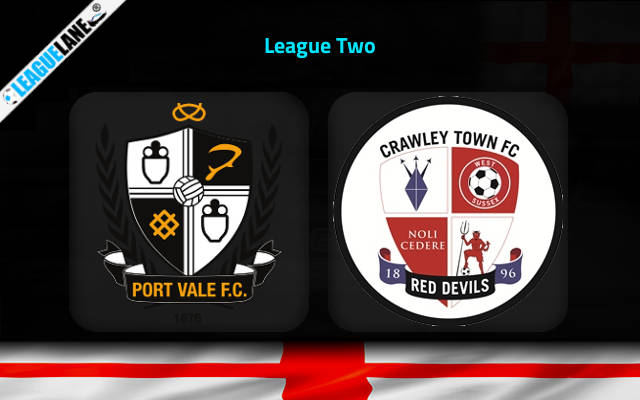 Crawley Town is on a 3-game unbeaten run in the league and are a mid table side. With unbeaten in 8 of their last 9 away matches in the league, they produce more results on road. Port Vale lost their last fixture which was their first loss from the last 10 games played. They are only two spots away from the Play Offs and hopes to secure that while inviting The Reds at Vale Park this Saturday for the 36th Round of League Two.

The Valiants are at 10th spot in the league with 50 points from 33 games. They won 13 times in the league while drawing on 11 and losing on 9 other fixtures. Under 2.5 goals were seen on their last 6 games in League Two.

Port Vale lost the last fixture against Colchester by 0-1 in the dying moments of the game. Fewer than three goals per match were scored during all of the past 6 fixtures where they have taken part. Opposition teams scored a total of 4 while they got themselves 5.

On the other hand, The Reds reside at the 13th position on the table with 45 points. Of the 33 matches played, they won and lost 12 games each while drawing on 9 other occasions. Their total goals to conceding ratio stands at 41:44 so far in the league.

Crawley drew the last two games against Scunthorpe and Oldham. They have been scored against on 5 of their last 6 matches, with opponents netting 7 goals in total.

Port Vale haven’t lost in the league to the Reds in their previous 6 h2h fixtures and are undefeated in their previous 4 league games played at home. We therefore, anticipate a win for the home team this Saturday.