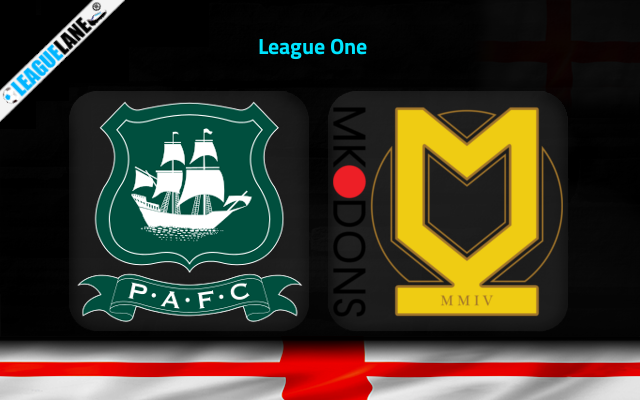 Plymouth vs MK Dons Predictions and Free Tips from our expert tipsters when the teams go head-to-head in the England League One on Sunday, 1 January 2023.

MK Dons are currently at the 21st spot, inside the relegation zone. They are now in a stage where they need to play without dropping points if they want to secure their spot in the table.

But things will not be easy for Cambridge this Saturday. They face the current toppers Plymouth. And Plymouth is having a strong form in the league. By the looks of things, they might seal another three pointer on Sunday.

Plymouth won five of the last eight head to head clashes against MK Dons. The latest meeting had finished in a 1-4 win for Plymouth.

They have only met four times at this stadium. Plymouth and MK Dons won two apiece of those four clashes.

Who will win the match between Plymouth vs MK Dons?

Our bet is on Plymouth as they follows an impressive form so far in this season. They have been impressive at home too. With a total of 10 wins from 11 home games, they definitely seem to have the shape of bagging another victory on Sunday.

Plymouth are often seen delivering high-scoring affairs but the trend is different of late. Only two of the past five outings saw over 2.5 goals ft.

The scenario is same in the case of MK Dons too. Therefore, we expect this match to have under 2.5 goals ft.

The defensive side of Plymouth have enough of holes to leak one goal. But their opponents MK Dons have generally offered weak performances in attacking on the road.

On top of that none of the h2h matches between these two at Home Park had goals from both ends. Therefore, expect a one-sided affair when these two lock horns on Sunday.

We expect Plymouth to seal a win and to secure their spot at the top. Backing them at 1.73 odds will be our first bet.

For the second tip, we like to place the under 2.5 goals ft bet at 1.93 odds considering the recent goal trend of these two.