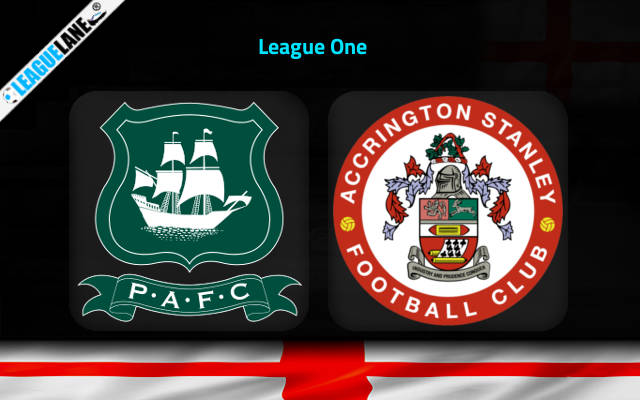 Plymouth Argyle are on a successful run of 4 games securing all 3 points in the league where they have managed to keep a clean sheet on all of them. In the zone for Play offs, they are level on points with Oxford.

Accrington are unbeaten since the last 2 games but have lost twice from their last 5 fixtures. With 18 points and 6 places apart, Stanley tales a roadtrip to Home Park in Plymouth this Saturday for the 39th Round of League One.

The Pilgrims are at the 5th spot on the standing with 68 points from 37 games. They won 20 times in the league while drawing on 8 and losing on 9 other occasions. They scored 60 goals in total while conceding a sum of 39 thus far.

Plymouth Argyle will be looking for a repeat result of the 1-0 League One success over Portsmouth. Under three goals per game were scored during all of the last 6 fixtures where they have taken part.

On the flip side, Accrington reside at the 12th position on the table with 50 points. Of the 37 matches played, they won 14 games while drawing 8 times and losing on 15 other occasions.

In the game prior to this, Accrington Stanley drew 1-1 in the league with Sheffield Wednesday. They have been scored against on all of their last 6 games, with opponents netting 12 goals overall.

Sean McConville has been involved in 6 goals in 7 league appearances against Plymouth and against no other side in the league does he have more, although has failed to register a goal or assist in his last two such games against the Pilgrims.

We predict a win for the hosts as they haven’t lost in the league to Accrington Stanley in their last 3 games and remain unbeaten since the last 3 league matches at home. Meanwhile, the visitors haven’t won away from home in the past 7 league fixtures.