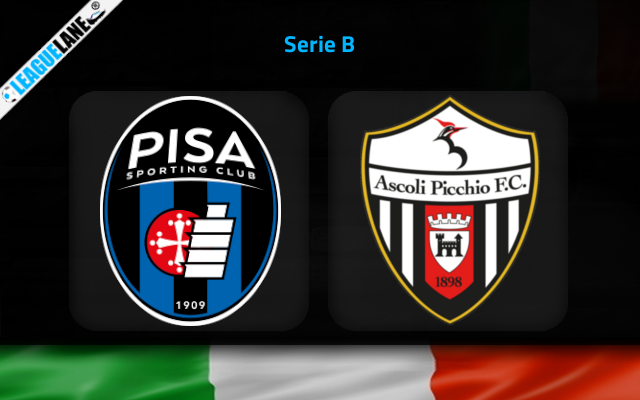 Pisa vs Ascoli Predictions and Free Tips from our expert tipsters when the teams go head-to-head in the Italy Serie B on Thursday, 8 December 2022.

Pisa has managed to gain the much needed momentum in the last many matches. From a winless start in the first five games, they are currently unbeaten in 10 games and will be high in spirits.

Meanwhile, Ascoli who have not been able to win in the last four games, will be the opponents for Pisa on Thursday. They head into this game after a 3-3 draw against the current 19th placed Comoin their last match.

Head to head matches between these two have been recorded often as both teams failed to gain a promotion to Serie A in the past three years.

Pisa won three of the last five meetings between the two. Moreover, they are unbeaten in the last four clashes at this stadium against Ascoli.

Who will win the match between Pisa vs Ascoli?

Pisa is currently on a three-fixture winning streak at home. They have a strong offensive side too. So a home win is likely to happen on Thursday at Arena Garibaldi – Stadio Romeo Anconetani.

At the same time, Ascoli is having a five-fixture unbeaten streak on the road at present. However, the exceptional form of Pisa will stand tall of Ascoli’s unbeaten run.

Pisa netted in a total of 10 goals in the last three home matches alone. Do also note that both the teams do not have a good defensive side. Therefore, over 2.5 goals ft can be expected for sure.

As mentioned earlier, both teams do not have a strong defensive line. So chances if both teams to score are high in this fixture. Also, both the sides have conceded goals in their recent matches.

We like to back Pisa to win as the main bet after analyzing all the above observations. We also like to place Both teams to score & Over 2.5 goals FT as the alternative bet.