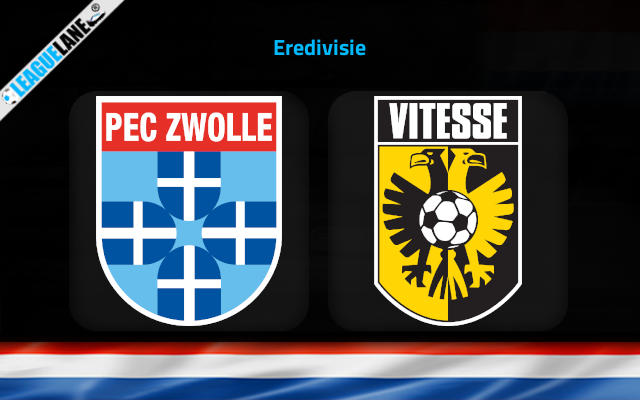 PEC Zwolle will host Vitesse in the first round of the new Eredivisie season on Sunday afternoon at MAC PARK Stadion.

Vitesse will travel to MAC PARK Stadion just three days after a trip to the Republic of Ireland for the return fixture of their UEFA Europa Conference League qualifying tie against Dundalk.

The team led by German manager Thomas Letsch were surprisingly easy to break down against Dundalk, especially if we know that the strong defensive line was one of their main strengths in the previous term of Eredivisie.

Vitas generally had a subpar pre-season form, failing to keep a clean sheet in any of eight exhibition tests.

Luckily for Vitesse, they are about to lock horns with an equally bad (or even worse) defense of Zwolle’s in their first domestic game of the season.

The hosts, who finished the last Eredivisie campaign in the bottom half of the standings winning just 9 of 34 league games, have also been struggling badly to keep their net untouched in pre-season tests this summer.

They’ve shipped five goals in the last two friendlies against Heerenveen (a 0-2 defeat) and Heracles (a 1-3 loss).

It was certainly not the start the new manager Art Langeler wanted at the beginning of his reign at MAC PARK Stadion.

Neither of the two outfits seem capable of keeping things quiet at the back here. The H2H tradition also suggests an open contest and we just can’t ignore the Both Teams To Score pick at the tempting 1.70 odds.

As for the outcome, the match could go either way. Instead of backing someone’s win, we’ll go with Vitesse to score two or more goals as an alternative betting option, priced up at the 1.83 odds.